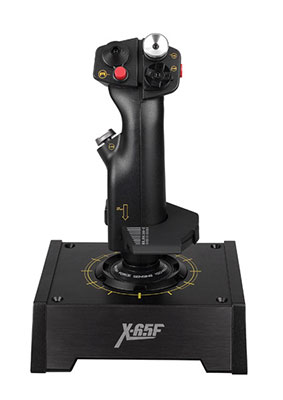 Pro Flight X65F Control System is the latest Saitek X series controller which enables flight simulators to "force sense" – the stick responds to pressure but does not move, just like in the real world modern fighter jets.

Pro Flight X65F Control System enables simulators to rule the sky. The product is custom-made from high grade metal castings and is therefore built to withstand many combat engagements. The product offers many controls – it caters for all the needs of a pilot, but the true innovation is within the stick itself: the Force Sensing technology.

What is Force Sensing?

As a simulation controller, Pro Flight X65F Control System is a world’s first: a ground-breaking control technology. The X65F's stick does not move; instead, it responds to pressure that you exert on the handle, similar to those found in real modern fighter jets. This results in an accurate, fast and realistic response that will make you the champion in your squadron.

The stick provides reliability and longevity – it has no moving parts and its shaft is made from high grade steel.

The joystick allows each user to program settings that are suitable for him or her, for complete comfort and accurate control. Users can continue adjusting the settings until they get optimal position.

Pro Flight X65F Control System reviews seem to indicate that this stick is popular with dedicated flight simulators who want a beautifully designed, top end joystick and throttle technology. The stick offers both control and advanced technology to users.

Other products recently released by Saitek are: