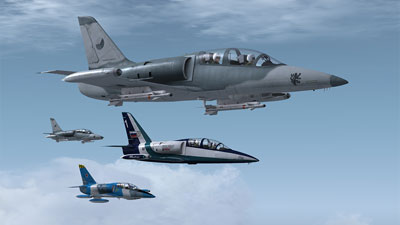 The Aero Vodochody L-39C Albatros is the most popular and successful jet trainer of all time. Designed and built in Czechoslovakia during the cold war, the L-39 was developed to train pilots transitioning from simple propeller driven aircraft to front line Soviet fighters. Over 4000 examples were produced, serving with over 25 air forces around the world, and although production ceased in 1988 some 900 are still in service today. The jet was built to be extremely agile, durable, self sufficient, and tolerant of student pilot error. After the breakup of the Soviet Union in the 1990s several hundred examples found their way into private hands and are now regular attractions at airshows of all sizes. The jet is also popular with formation teams, serving with the world famous Breitling Jet Team and Vjazma Rus Aero Club, and even has its own competition class at the Reno Air Races.

This Lotus Simulations rendition of the L-39C Albatros bucks the trend in framerate sapping aircraft models by careful and considered design of geometry, textures, and code from the start. Built from the ground up for Shared Cockpit online training and multiplayer formation flight, as well as normal single player use, this aircraft is designed to maintain high framerate performance in all flight situations.

The Albatros features fully detailed virtual cockpits, in both dual and single seat versions, as well as a Reno racing variant and a special stripped down and ultra high performance model for those who participate in online formation flight teams. All of the L-39's instruments are rendered in full 3D for smooth and stutter free flight, and all of the plane's unique performance and handling quirks have been recreated, making this aircraft perfect for pilots who seek a challenging "stick and rudder" flight experience.

The Albatros features extensive and in depth systems modeling, including some with potentially hazardous consequences, and several unique and immersion enhancing special effects that have never before been seen in Flight Simulator X. Prime examples of these innovations are its revolutionary new light systems, and the return of VC canopy rain effects to FSX at last, something which was generally thought impossible.

Being built specifically to accommodate Shared Cockpit flight, all of the real L-39's rear cockpit instrument failure simulation systems have been replicated as well, allowing instructors to train students online in partial panel IFR flight or the handling of systems failures.

The flight dynamics and performance have been derived from personal developer experience flying a real L-39C and with extensive further input and testing by private L-39 owners.

The L-39's brilliant sound set has been provided by Turbine Sound Studios and almost every switch and system in the cockpit has associated sound effects for that extra layer of immersion.