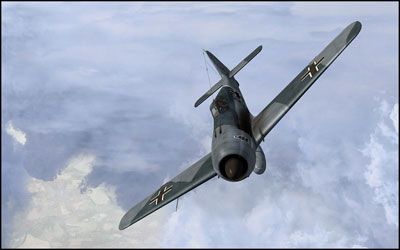 The Focke Wulf Fw 190 A, add-on is compatible with Microsoft Flight Simulator X SP2. It was designed by Classics Hangar and is moderately priced. This particular simulator add-on is not available for instant download. It can, however, be purchased in CD ROM media format.

The Luftwaffe is a ferocious fighter jet. In this add-on, the designers worked hard to ensure that it was incredibly detailed and accurate. They did such a good ob that that it was bestowed a special award for accuracy and detail.

The Focke-Wulf Fw, a fighter plane, is a site to behold in this add-on. Virtually, people hadn’t yet seen anything like it. The Luftwaffe was fast in a zoom climb, stable during dives and easy to maneuver and turn. In real life, each of these things were significant upgrades from the 109F. It was also considered much better than the Spitfire VX.

The Focke-Wulf Fw 190 A add-on is really cool. It was developed by Classics Hangar,’ designers that are widely respected and admired. Their take on this simulator add-on includes several variants of the plane, including A-3, A-4 models and the 2,200hp A-9.

Players will have five Flight Simulator X exterior and interior models to choose from along with more then 20 liveries. Each of the liveries is presented in high resolution and support self-shadowing, specular bump mapping and bloom.

The Focke-Wulf Fw 190 struck fear in the hearts of those it went up against. Classics Hangar beautifully captured those things that made this aircraft unique and exceptional. The details are spot on, so much so that virtual pilots will get a real sense of what it felt like to be piloting one of WWII’s deadliest and most-revered planes.

For the “price of admission” this simulator package is a steal. The level of quality and detail surpasses that of many of the simulator add-ons available on the market. Individuals that want to experience what is might have been like in the cockpit of the Focke-Wulf FW 190, should really consider this add-on. It will be their best chance to.