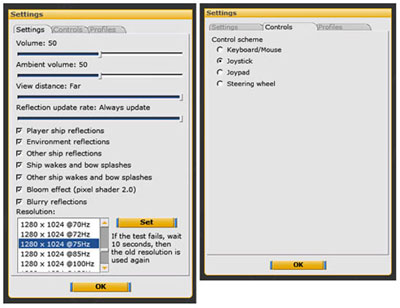 Ship Simulator 2006 is available as a boxed version and by download. The reviewed boxed version comes on a single CD-ROM which installs without any problem with Windows XP SP3, on a Packard Bell desktop, Pentium Dual CPU 2.20GHz, 4Gb RAM, NVIDIA geForce 9300 GE. The program needs a 650MB of which a 359Mb is needed for the Tutorials. A product key and username is required, but after that, the CD is not required anymore to play.

Ship Simulator 2006 is a realistic simulation for navigating and maneuvering ships in ports and at open seas under different weather circumstances. It is therefore strongly advised to watch the tutorial “shipsim2006_play-mode_tutorial” first!

Also a must is to scroll through the main menu before collapsing yourself headlong into a mission. The rather rigid AI-traffic asks extra seamanship from you to avoid collisions.

Recklessness and haste within a mission is punished harshly with penalties, so it is a serious game and one must obey to the rules of maneuvering and navigating of ships. At the other hand, successful ending a mission will be awarded.

On the contrary, even if you stay with the rules, the AI-traffic will not obey them, so when anchored the Titanic laying still in the water, all kind of power boats will crash full speed ahead into your side, causing your damage account rise sky high. A major drawback.

A little bit of training and familiarizing yourself with rudder, chart and camera movements is a must, otherwise it will take too long a time to end the missions in a reasonable time. For that, it would be easier if the controls show also a rudder position indicator and a clear null indicator for the ship’s engine. It would also be a great advantage if the sub-windows can be undocked to put them on a second screen, thus enabling an unobstructed view from steering hut or flying bridge.

Also do not expect the variety, the realism, and the open architecture as in Microsoft’s Flight Simulator and alike. So it will not be possible to load ships and/or ports/harbors from third parties. You have to wait for VStep to release add-ons. 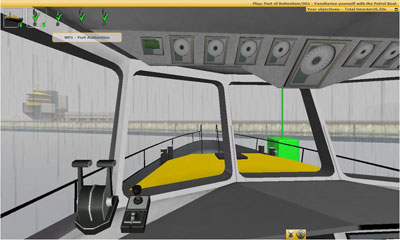 On the bridge of a boat

However, as said before, Ship Simulator is a very realistic simulation of which one can learn and practize handling motorships and yachts in particular to an extension which guarantee a prolonged satisfaction.

A con of the game is that Vstep streched realism a bit too far with the mission to anchor the Titanic in the bay of Phi Phi Islands, considering its memorable first and only voyage in icy conditions of the North Altantic. Instead of an iceberg, one can ground it on a tropical reef in Thailand. 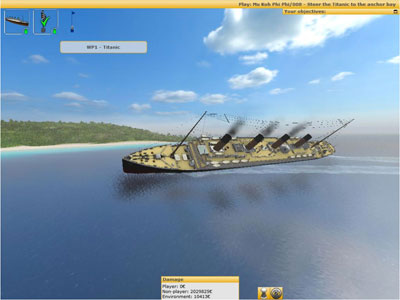 Although you have to give a (nick) name when playing for the first time, it is nearly impossible to get a summerize of your credits, rewards, damages, completed missions and their data (well, I did not discovered that function yet). So no statistics.

When running the programm, the intro can only be skipped by [Esc]. Strange enough you are asked then if you really want to end the game…of course not!! Maybe there will be a patch for it ? By the way, nowhere one can find out which version one has. It seems that already a 2008 version and a Extreme version has come out.

This review of Ship Simulator 2006 was written by Henk van Ahee from the Netherlands. He has sailed the world oceans for 5 years as fully qualified 3rd (navigating) officer. After that he had for himself a 45’ steel motor yacht for sailing the Dutch rivers, lakes and waters in his spare time.