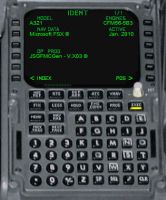 Now available from JSGPanels is version X04 of the Universal Flight Management Computer (FMC) for FSX®. An equivalent version is also available for FS2004®. For details, read this announcement. For new users an unrestricted licence to use this new version of the FMC can be obtained from JSGPanels for just $14.99 (USD). Further developments are on the way and will, of course, be completely free of charge to all licensed users.

PROGRAM NAME
The name of the FMC gauge has not been changed so, if you are an existing user, you do not have to make any change to your panel.cfg files. HOWEVER we strongly recommend that you MAKE A BACKUP copy of your present FMC gauge files before installing this new update. Folder JSG-FMCGen in the .../Gauges folder is the relevant one here.

NIGHT ILLUMINATION
The new FMC has been designed to blend in better by using the standard lighting supplied with the FSX ® aircraft. This works perfectly when the panel being used belongs to the aircraft being used. However, if it does not, some differences may appear in the colors displayed. In these cases we have tried to get the most realistic colors we can.

CRUISE ALTITUDE
The correct use of this parameter is VERY IMPORTANT as it is used to generate the ECON CRUISE SPEED.

Note that version x04 only recognises those types of aircraft which we think are likely to be used with it but, if requested, more aircraft will be added to future versions. Any remarks and/or suggestions you may have about this will be welcome.

FUEL WEIGHT AND LOAD
For heavy aircraft the fuel weight and fuel load used are the ones in the aircraft.cfg files. However, depending on the designer, these can be different. The "fuel consumption", MDTF and MFT in the "PROGRESS" page are average ones. The MDTF depends on the current speed, altitude etc. and so cannot be exactly precise.

SLOW AIRCRAFT
For jets the usual ECON climb and DESCENT speeds are 280 knots and 300 knots respectively. However these are clearly not appropriate for use with small aircraft such as the CESSNA 172. So, when using the FMC with aircraft of this type, either enter the appropriate speeds in the FMC yourself or do not use VNAV.

The same applies in the case of ALTITUDE. The usual VERTICAL SPEED of 1000 or 1500 feet a minute is not appropriate so, in this case, do not use the VNAV function of the FMC but enter the ALTITUDE and VERTICAL SPEED directly into your autopilot panel.

The standard LNAV and other functions can however be used and so no special action is required there.

COST INDEX
This is used only by jets and has no relevance when using the FMC with a small aircraft.

SPEED HANDLING WITH LARGE AND SMALL AIRCRAFT
The FMC handles speeds differently when it is used with a large aircraft, such as the B747, and a small one, such as the Cessna 172. Thus it computes the ECON CRUISE SPEED, V1, VR and V2 for large aircraft in accordance with the cruise altitude and COST INDEX and load but uses fixed values with small aircraft.

FMC WINDOW SIZE ADJUSTMENT
The FMC window size depends on the way the panel is initially defined. However, if you find this too large or too small, you can adjust it quite simply by modifying the panel.cfg file. The relevant section is:

and the relevant line is:

PUSHBACK TRUCK
A new parameter has been added in the panel.cfg file to enable the pushback truck to be displayed:

You can adjust the position on the screen by changing the values 449 and/or 190.

Purchase your copy over at SimShack