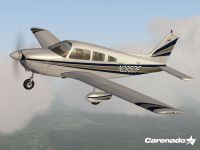 Carenado has released the FS2004 version of the previously released FSX PA28-181 Archer II. This product is not an upgrade from our previous Archer...it is a completely new development with many new liveries. The product has superior textures and the 3D model has an excellent relationship between polygons and details, soft curves and excellent FPS allowing a smooth performance.

Three models are included: with and without fairings and a mix of both. Four different paints are included plus a blank texture, all with maximum details and realistic textures.

View this aircraft on SimShack.net.