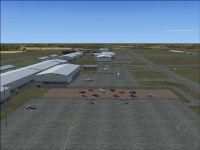 View of Lelystad, The Netherlands.

Lelystad Airport, situated in the middle of The Netherlands, is the largest General Aviation airport of the country. A lot of flight schools and flying clubs have their home at Lelystad as well as some helicopter companies (Lelykopters, Heli Holland and Helicon).

Every now and then a business jet can be seen, but not very often due to the length of the runway. The airport is also famous for its huge aviation museum Aviodrome.

The airport is relatively new (about 35 years old) and will expand in the future: a longer runway (2100 meters), ILS, official air traffic control, scheduled and more business traffic and aircraft visiting QAPS, an aircraft painting company.

ADE9X (Airport Design Editor) by Jon Masterson is an invaluable freeware utility for developing Airports and the latest version - 1.46.02 - is designed for both FSX and FS9 use - and includes Jim Vile's graphical approach editor. My thanks to both Jim and Jon for all their help and support on this and all AIG projects.

The archive aig_ehle_lelystad_default.zip has 7 files and directories contained within it.