Screenshot of NB36 in flight.

X-Plane VERSION 10....ONLY.
Slight wing flex, working Nuclear bombs, terrain following all added or corrected. This aircraft was previously uploaded as version 9.. It quit working when infinite electrical power was not available. Version 9 removed bomb smoke and blasts. This aircraft has bomb blasts and they are all nuclear.

With permission to modify and distribute from Cliviendy I have modified his beautiful B-36H into NB-36H. The UAV panel was basically produced for another plane by a good friend who wishes to remain anonymous. I have made several additions and changes to the panel.

This version of the NB-36 Electric U.A.V. is basically the same as the NB-36H Electric, but with a new cockpit.

It seems obvious now and probably in the mid 50’s that nobody would like to fly with a reactor in the back of the Bombay, Nuclear weapons are bad enough.
Nobody would want to become known as part of, “THE GLOW IN THE DARK WING”.

It has been said that if WWIII had happened during the cold war, that we would have 2-3 weeks of arguing and posturing before the all out nuclear exchange.
Well this monster could be flown near the border of the opponent as intimidation.

Who would fire a missile or send a fighter to destroy this plane knowing that a great nuclear fall would fall on them.

In the mid 50’s the MX1589 project was to produce an X-6 aircraft. They put a 3 megawatt nuclear reactor into a B-36H. The reactor was operational, but it did not supply power to the propellers.

Well I have completed what they started, but with 21st. century hardware.

It flies quite nicely and has a range of 2 years.

Environmentalists note: This aircraft will be stationed at Guantanamo Naval base and will fly over the USA only once to deliver it there.

Be sure and read the README, it has some interesting URL’s that justify making this aircraft.

I am a dreamer, not an engineer.

Albert Einstein said, “ If you can dream, you can do the impossible”. 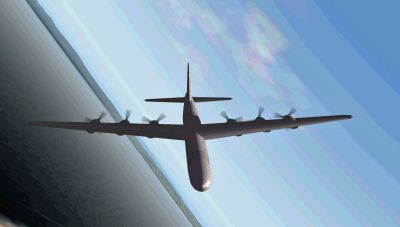 Screenshot of NB36 in flight.

The archive NB36H Electric UAV-10.03.zip has 113 files and directories contained within it.