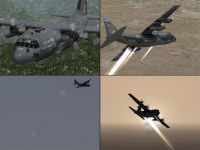 In my mind (an in the minds of many others), the AC-130 is ranked alongside the A-10 as the coolest attack aircraft in service. This is for good reason. The AC-130 Spectre, a variant of the famed C-130 Hercules transport, is an airborne tank: it has a range of over 4,000 km, a top speed of almost 500 kph, and is packed with a 25mm Gatling cannon, a 40mm Bofors cannon, and a 105mm howitzer. Unsurprisingly, this aircraft with its massive amount of firepower has seen its share in pop culture, appearing in films such as Transformers and The A-Team.

Now, this aircraft has, in great detail, been brought to X-Plane! Based on the default C-130 by Javier Rollon, this model includes three guns mounted on the left fuselage, flares, and MANY changes to the texture to accurately reflect this aircraft. Thanks to:

-Javier Rollon and Laminar Research for giving me permission to use the default C-130 this aircraft is based on.

-Appster for allowing me to convert parts of his AC-130 to use as the gun barrels.

-Razorback_pilot for the 25mm gun object. I know, the one used on this aircraft has six barrels, while the real one has five. They look identical unless looked at closely, so I don't really care. 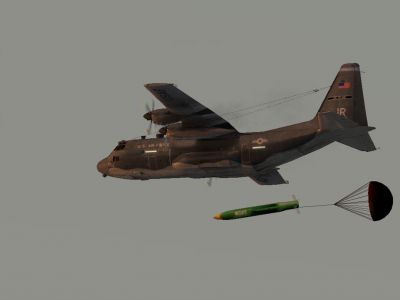 The archive Lockheed AC-130.zip has 199 files and directories contained within it.

Its looking awesome on the sim. One of the best aircrafts for it, hope someone can make a 3D cockpit to it.