I have included v9.7 files in a folder named V9.7 CONVERSION. Replace the respective folders and files with the ones in the v9.7 folder.

Tibozeboss made a He 111Z Zwilling to go with this aircraft.

The Me 321 was the largest military glider ever built. Over 100 were built and was modified into the powered Me 323 Gigant. Both the 323 and 321 were big and could take many hits but were slow, making them easy prey for Allied fighters. None of the types lasted we think past April 1944.

Besides the towplanes the aircraft would carry rocket pods to help generate air speed. A disaster did in fact happen when a rocket pod failed to ignite, causing a violent yaw taking out all the Bf-110 towcraft and all lives lost.
Overall the Me 321 probably could be considered a combat failure. As with other German aircraft such as the Ju-52, Ju-87, and the Me 323, it was too slow for combat conditions. It was great at heavy lifting, in fact the clam-shell door design is still used in modern cargo aircraft. 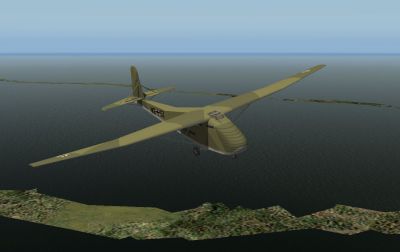 The archive Me 321 B-1.zip has 16 files and directories contained within it.

Nice plane! Thanks And it have a 3D cockpit! :D