Installation and usage:
Unzip to a temp folder and copy or move the ME-163B folder to your FS9/Aircraft folder, then copy all the *.fx files and textures from the Me-163/effects folder to the fs9/effects folder.
Copy the flight files(optional) to the folder where the default fs9 ones are keeped,normally C:\Documents and Settings\Users name\My Documents\Flight Simulator Files.

Flight Notes:
First up this is just a fun project and due to the limitations in FS9 is nowhere near how the real aircraft would feel/fly.

Start up ctrl + E or use the start switch in the VC through hole in throttle lever (click and drag the lever slightly forward for full access).
The landing gear has a few workarounds,basically the electrical system is failed when the gear is retracted.
and is then lowered by the manual gear pump via the spoiler(you use the default gear key or click the gear lever in the VC).
This means the gear can be deployed once only,by repeatedly hitting the g key,will eventually allow the wheel dolly to show so don t do it :).This also means that the main gear is only slightly deployed for landing allowing for a slightly more realistic landing,ie drops wings and slides along the main skid.
Due to using the spoiler function for gear deployment the flap key now operates the under wing speed brake and flaps.
Most of the controls/gauges in the VC are mouse clickable(switch on tool tips to see whats what).

The Komet has a mach limit just over 0.8 mach this was followed by a sharp nose tuck,there is a OverSpeed warning light top right hand panel,which will flash just before this is reached,if no action is taken an xml gauge will cause a sharp down stick (if this gets annoying just comment out the mach.xml from the VC panel in the panel.cfg :) )

Landing well they are fun,try to keep the tail wheel planted with a progressive back stick as speed drops off otherwise nose skid will dig in flipping you on your back,keep wings level as long as possible (the aircraft will veer of in the op direction due to the contact points coming in contact with the ground as the wing drops not very realistic but its the best I can do) 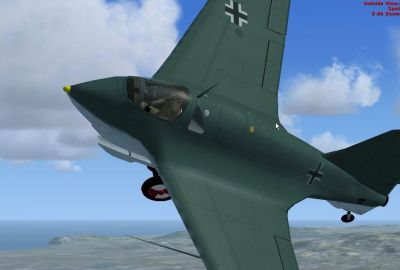 The archive fsxme163.zip has 58 files and directories contained within it.

Great craft but lags an extreme amount when you throttle down and it flames out and smoke comes from the engine and the lag doesn't stop until you force quit the flight.