The Me 323 was the powered version of the Me 321 glider. As with my previous upload, its exactly the same except for a few things. They are the addition of six engines, a bigger panel, improved cockpit, non-firing MG15 gun turrets, and more wheels. Also the engine sounds are of a Bristol Hercules, not the Gnome-Rhome 14N-49.

For you v9.7 guys, I have included v9.7 files in a folder called V9.7 CONVERSION. From now on all my aircraft will include v9 files until I no longer see fit. Just replace the v10 files with the v9.7 files.

Me 323 history: By September 1942, Me 323s were being delivered for use in the Tunisian campaign, and entered service in the Mediterranean theater in November 1942. The high rate of loss among Axis shipping had made necessary a huge airlift of equipment across the Mediterranean to keep Rommel's Afrika Korps supplied. On 22 April 1943, a formation of 27 fully loaded Me 323s was being escorted across the Sicilian Straits by Bf 109s of JG 27 when it was intercepted by seven squadrons of Spitfires and P-40s. Twenty one of the Me 323s were lost while [4] three of the P-40s were shot down by the escorts.[5]In terms of aircraft design, the Me 323 was very resilient, and could absorb a huge amount of enemy fire, unless loaded with barrels of fuel – the Afrika Korps' nicknames of Leukoplastbomber ("Elastoplast bomber") or even more derisively as the "adhesive tape bomber", were somewhat unfair.[citation needed] The Me 323 was something of a "sitting duck", being so slow and large an aircraft. However, no transport aircraft can ever be expected to survive without something close to air superiority, and it is believed that no Me 323s survived in service beyond summer 1944.A total of 198[6][7] or 213 Me 323s were built before production ceased in April 1944. There were several production versions, beginning with the D-1. Later D- and E- versions differed in the choice of power plant and in defensive armament, with improvements in structural strength, total cargo load and fuel capacity also being implemented. Nonetheless, the Me 323 remained significantly underpowered. There was a proposal to install six BMW 801 radials, but this never came to pass. The Me 323 was also a short-range aircraft, with a typical range (loaded) of 1,000-1,200 km (620-750 mi). Despite this, the limited numbers of Me 323s in service were an invaluable asset to the Germans, and saw intensive use. 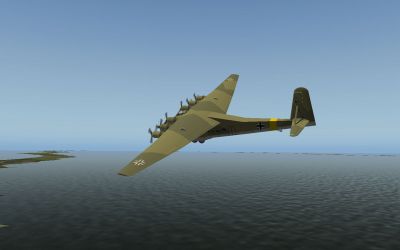 Screenshot of Me 323 in flight over coastal waters.

The archive Me 323.zip has 47 files and directories contained within it.

Nice plane! Well worth, its very interesting to fly it. Needs some work on external textures and on the 3D cockpit, but still looks very good, and it also have a 3D cockpit, which is a must. Thanks for this aicraft!