For use with Just Flight's Traffic 2004. Repaint and flight model by Daniel Nole.

For use with Just Flight's Traffic 2004. Repaint and flight model by Daniel Nole. 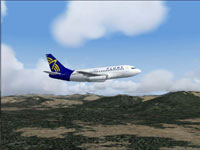 Screenshot of Pluna Boeing 737-2A3 in flight.

PLUNA B.737-2A3Adv CX-BOP, C/N 22739. This one is my first repaint of the excellent Just Flight Traffic 2004 Boeing 737 series 200. Original Traffic 2004 had only 2 Latin American liveries (VARIG and TAM), with this new one you can programmed new flights with the small Airline of Uruguay: PLUNA. Normal destinations of PLUNA B.737's are Buenos Aires Aeroparque J.Newberry, Punta del Este C.Curbelo, Asuncion S.Petirossi, Sao Paulo Guarulhos,Santiago de Chile Arturo M.Benitez, Porto Alegre Salgado Fihlo and sometimes Rio de Janeiro A.C.Jobim and Florianopolis. I have included a serie of seven Flights to this main destinations and the timetable are the rights one of the old example of the year 2001. Also included the AirFile with the new aerodynamics of the B.737 series 200 Advanced.

Open FS2004 and localized in the aircraft File the folder JFAIB732.Put in place the new texture "texture.pluna"; now you have the choice to overwrite the Aircraft block de note with the new aerodynamics and the new PLUNA texture(all originals are of course always there);or you make a selective copy of only:

Flightsim.12 means this plane is the 12th after the original Ryan Air EI-CNT.

NOTES: Some imperfection in the livery, for example the logo "PLUNA" is not painted in the engine nacelles (A problem with the side texture, you can read PLUNA in the left side of the plane but the word is inverted in the other side); same reason and problem with the registration CX-BOP painted under the left wing.

The archive 2004trb7.zip has 18 files and directories contained within it.