The later TCA deliveries were type 757 including CF-THD. Delivered in February 1957, it served TCA then Air Canada until withdrawn in June 1969. It was then broken up. Requires the FSDS Vickers Viscount 700 model by Rick Piper. By Garry Russell. 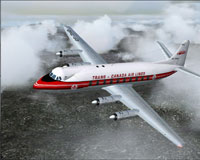 The archive v757tca.zip has 22 files and directories contained within it.