Circa 1963. Textures only; requires SL188.ZIP. Model by Mike Stone. Repainted by Graeme Porter.

Circa 1963. Textures only; requires SL188.ZIP. Model by Mike Stone. Repainted by Graeme Porter. 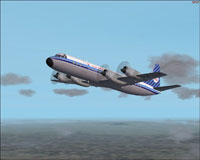 Screenshot of KLM Lockheed L-188 Electra in the air.

Lockheed's L-188 Electra was designed and built with American Airlines' requirement for a domestic airliner with a seating capacity between 75 and 100, however, it was Eastern Airlines who were the 1st to use the aircraft in commercial service, due to industrial action by AA's pilots. Her first test flight was in 1957, and her first commercial flight took place in 1959.

The L-188A had a troubled service life, with several crashes attributed to a design fault with the engine mountings, which led to excessive vibration in the wing. A redesign of the wing and engine saw the aircraft resume normal service in 1961. 115 L-188As were built between 1957 and 1961.

In addition to the 170 Electras that were built, more than 600 P-3 Orions were built between July 1962 and April 1990. The Orion is a military version of the Electra, used as an Anti-Submarine Warfare and maritime patrol aircraft. Still in service, it is used by the US Navy and the US Coastguard. It remains the US Navy's sole land-based ASW aircraft.

Once you have obtained and installed the Electra, follow these instructions to install:

The archive klm63.zip has 25 files and directories contained within it.