New colours, registration PH-BFR. The DC-5 was a high performance, short range, feederliner. The only airline to proceed with an order for the DC-5 was KLM who purchased four. However the invasion of Holland caused their DC-5s to be delivered equally to KNILM in the Dutch West and East Indies instead. Repaint by Patrick Zonneveld. 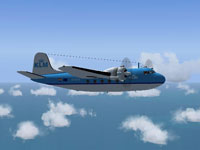 [fltsim.XX]
title=DC5 KLM New colours
sim=DC5
model=
panel=
sound=
texture=KLM
kb_checklists=
kb_reference=dc-5_ref.htm
ui_manufacturer=Douglas
ui_type=DC-5
ui_variation=KLM
atc_heavy=0
atc_id=PH-BFR
atc_airline=KLM
atc_flight_number=214
atc_parking_types=GATE,RAMP
atc_parking_code=KLM
description=The DC-5 was a high performance, short range, feederliner quickly eclipsed by the Lockheed Lodestar. The only airline to proceed with an order for the DC-5 was KLM who purchased four for use into Amsterdam. However the invasion of Holland caused their DC-5s to be deliverd equally to KNILM in the Dutch West and East Indies instead. By late 1941 all were in the Dutch East Indies. In 1942 one was captured by the IJAAF. The survivors were soon in use with 21 sqn RAAF and Ansett-ANA supplying ANZAC forces in New Guinea. Impressed by the USAAF 1944-45 they were then designated Douglas C-110s. One returned to Ansett-ANA serving in New Guinea 1946-47 before being sold to New Holland Airways. The prototype was converted to KLM production standard and was based in Seattle as Bill Boeing's corporate VIP aircraft from April 1940. It was impressed by the USN for VIP transport duties in February 1942 becoming the only R3D-3 until its sale for scrap in January 1946.\n\nRepaint by Patrick Zonneveld

The archive dc5klmnc.zip has 17 files and directories contained within it.