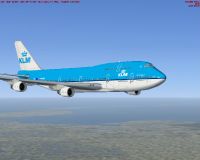 1. Place the "Texture.RDA" and "Texture.RDACARG" folders into your Flight Simulator X directory, under ...Microsoft Flight Simulator X\SimObjects\Airplanes\B747_400
2. Open the aircraft.cfg file and paste the following text into the file after the previous aircraft repaint, ensuring to replace [fltsim.x] with the next number in sequence, e.g. [fltsim.11 and fltsim.12] 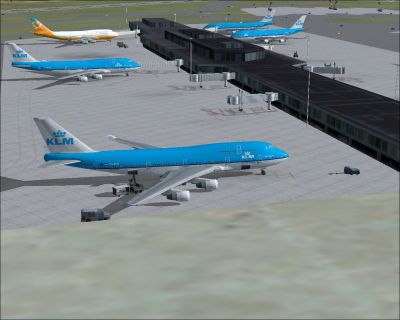 The archive klm_b747.zip has 31 files and directories contained within it.

With this excellent mod, you get access to an awesome and simple remake of the old KLM and KLM cargo repaints for the Boeing 747-400. These were designed by Gabor Kovacs, a developer I have a lot of time for, and was hugely impressed by the continued precision that he adds to the table.

One of the most impressive packages that he has released recently, I found that the depth of detail across the entire setup was up there with some of the best re-paint packages I’ve used.

The design and the depth is very impressive, taking the old aircraft and making it look the best that it possibly can.

The installation process is very easy to follow and get to grips with. That made it much easier for me to get the aircraft up and running and working in an order that I felt comfortable with. Whilst some mods can be a bit of a nightmare to install, this was a piece of cake.

One of the most impressive factors of this mod, though, was the fact that it provides you with such incredible detail and precision to the aircraft itself. It’s more or less reworked the whole textures to give you something that looks fresh and exciting, bringing the old model to life and making it look the very best that it can.

If you are sick of old textures that look flat and outdated then this can be the perfect way to correct that problem once and for all, starting today.

It’s the perfect aviation solution for those who want to find something fresh and exciting about their aircraft again.

To make the 747-400 look attractive once again, try this mod out. I was a huge fan of the detail and the precision included, bringing the whole thing to life with vivid detail.

All in all, I was hugely impressed with the overall package and presentation provided here. It was slick and clear in terms of functionality, and provided me with everything I expected – and a little more for good measure.

I would happily recommend using this for those who want a steady and strong performance mixed within a solid aircraft that looks great. Whilst you might find it a bit different to other Boeing aircraft at first, the distinctive eel of the aircraft is well worth mastering.