Here is a repaint for the FSX 747-400: Lynx Aircraft Number: L20020C . This aircraft was repainted by the Lynx Airways Worldwide Art Department under the supervision of its Director Yoshi. This project began on November 10, 2009 and was recently completed on February 26, 2010.

When Yoshi and her team finished, the Chief went into action. The Chief is the Lynx Airways Worldwide Hangar and Maintenance Director and responsible for all maintenance and inspection work on all Lynx aircraft. The Chief (who is me) and his crew received the Lynx 747-400 Cargo aircraft and began fuselage and interior modifications. These modification modified the 747-400 from a purely passenger aircraft to a cargo aircraft. Some passenger spaces were maintained in the front of the aircraft to accommodate personnel such as rescue and medical responders. Lynx Airways is renowned for transporting relief personnel and cargo to many trouble spots around the worked on short notice. This configuration will assist in maintaining that effort. Go to www.lynxairways.com for details on Lynx Airways Worldwide.

Let me tell you first what is going to be happening. There are three files in this zip file. You are reading the “Readme” file now. You can delete this one after you have checked that everything is working properly. The other two files are the ones you will be moving into Flight Simulator. The “Aircraft.cfg” file will make sure the Lynx 747-400 Cargo aircraft gets added to your aircraft list as well as listing the correct call sign of “LYX” for ATC. The Texture.Lynx folder is the actual repaint of the 747-400 it contains all the required templates and that little picture that flight simulator shows you in the aircraft selection window. So…let’s get started.

1. If you are reading this, then you already unzipped this file into a folder or someplace on your hard drive where you can see each file. By this time in your life, you should already know how to unzip a file. If not then you will need to “Google” it.

2. Let’s go do dome preventative maintenance first. Go the “b747_400” folder located under the Airplane folder of FSX. On my computer the path is: "C:\Program Files\Microsoft Games\Microsoft Flight Simulator X\SimObjects\Airplanes". Find the “aircraft.cfg” file and copy it. I want to make sure you have a clean copy of this file in case things go wrong. This is the original file so paste it somewhere for safe keeping. Make sure you remember where you put it.

3. Now go back to the unzip folder and copy the new “aircraft.cfg” file and paste that one in the b747_400 folder. You will be asked to over write the current copy. Because you already have a safe copy stashed somewhere, say “Yes”.

4. Now you will need to return to the unzip folder and copy the Texture.Lynx folder in its entirety. Once you have done that, go to the b747_400 folder in FSX and past it in there. That new folder “Texture.Lynx” is now added to the list of texture folders.

That should be about it. You copied the original “aircraft.cfg” file and put it in a safe place: you then copied and pasted the new “aircraft.cfg” file in the b747-400 folder of FSX and lastly you copied the entire new “Texture.Lynx” folder and pasted it into the b747_400 folder of FSX. Everything should be ready to go. Turn on FSX and find the new Lynx 747-400 Cargo: select it and start enjoying. 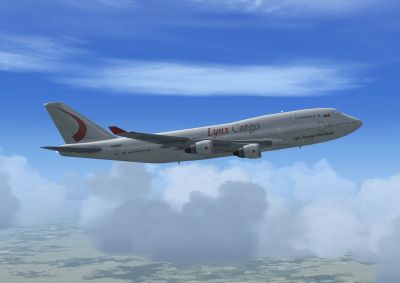 The archive lynx_747-400_cargo-1.zip has 14 files and directories contained within it.