Scaled Composites Pond Racer 2011. Here is a working FSX version of the Scaled Composites Pond Racer (original FS2004 model by by Blake Melancon). Bob Pond commissioned the design with the idea of developing a modern aircraft that could compete with the vintage warbirds in the Unlimited Class at the Reno air races... here is a slightly tweaked 2011 version with a max speed around 540 mph! So have fun at Reno with this great aircraft. By Colin Sefton.

Ok this is the Original Model for FS2004 ''pondracerfs2004.zip'' by Blake Melancon with edited and additional textures and a couple of gauges for FSX use..the original fs2004 model was invisible in fs2004 due to alpha texture issues!..Night lights do not work as most flying would be in the day!...I have also tweaked both CFG and air files to simulate a TWEAKED 'what if 2011 version' improved pond racer!....engines and power uprated!..now its possible to do 540mph!..slightly faster than Rarebear world record of 528mph...so have fun at the reno races!

* The Original .mdl files for the Pond Racer were lost in a computer crash. A beta tester was kind enough to send me the last beta file sent out. What you see is what you get as there is no way to adjust the 3D model at this point.

The Pond Racer has been a favorite of mine since it graced the cover of Popular Mechanics in the early 1990’s while I was a teenager. I’ve always had a fascination with the aircraft, from its graceful lines to its distinctive engine sounds. I hope you enjoy this model as much as I’ve enjoyed building her. The Pond is my first aircraft design for Flight Simulator, even with its modeling shortcomings; I think you’ll enjoy her also. She was built over the course of several months while I was stationed in Iraq with the US Army. It was a way for me to pass the time. If you like the Pond Racer, please feel free to contact me and let me know. If you don’t like the Pond Racer, delete it from your hard drive. It was a free model.

If you’d like to repaint the Pond Racer, go right ahead but please make sure you give credit to me for the model and those listed above for their contributions.

This model is freeware and is not to be uploaded to any website that charges any money for use or downloads. 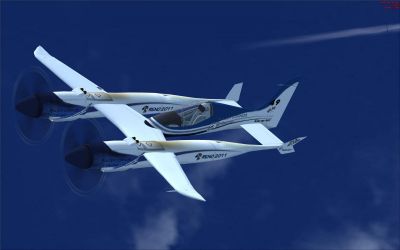 The archive pondracerfsx.zip has 134 files and directories contained within it.

This rather interesting little mod was recommended to me to try out by a friend who has actually spent time around these kinds of projects in the past and said that it felt very authentic. So I decided to try out this scaled composite pond racer, full of wonder about just how you would actually managed something so…different.

The idea of the aircraft was to create a rival for the Reno air race classes, giving them something that is a bit different to the rest. What you get, then, is one of the most interesting aircraft that you are likely to come across in a simulation!

The first thing that sprung to my mind when flying this was the incredible level of detail on the model. It’s expertly designed and looks really impressive, with textures perfectly carrying off a look & feel that is just sublime. The work on the actual model itself is hugely impressive as it makes sure that the aircraft can fly at its full potential, but the thing that really impressed me along the way was the incredible work that went into the way that it flies.

The flight dynamics are more or less spot on after my reviews and referencing, so I can say with pretty clear confidence that this is about as close to the real thing as you are likely to find a flight simulator these days. It feels really odd to fly, I’ll admit, but that is not necessarily a bad thing!

Given that this thing is capable of doing up to 540mph, though, you can easily feel as if you are flying through the skies at breakneck speeds. Whilst other aircraft can go faster this feels really impressive for such a slight piece of hardware adding even more fun to the system.

However, this mod introduces a small army of other changes such as the new gauges added to the product itself. This all comes together and creates something engaging and interesting which is, without a doubt, very interesting and detailed. The new gauges are easy enough to use and can give you plenty of control over the aircraft when you are flying.

The work done here by Blake Melancon is very impressive indeed and if you are interested in flying something a bit more out there than your average aircraft, this is more than worth your time.

Pretty cool plane. The graphics are good. The props extended out in front of the plane were distracting at first. But once I got used to them, it was OK. But I think that is because the cockpit sets further back than a P-38 so it gives you a longer view. Good job guys!