MS760 Paris No.01 Demonstrator, 1955. This is a repaint of Tim Conrad's MS760 Paris (MS-760PARISJET.ZIP). Aircraft is shown in the markings worn by the first prototype during its 4 month demonstration tour to the United States and Canada in 1955. This plane was destroyed when it landed short of the runway in Lisbon on 25 May 1958. Although it caught fire, both occupants were safe. Repaint by Michel Gerard.

MS760 Paris No.01 Demonstrator in flight.

This is a repaint of Tim Conrad’s MS760 Paris (file names: ms760.zip + MS-760_FIX_KIT.zip on SimOuthouse). Aircraft is shown in the markings worn by the first prototype during its 4 ½ month demonstration tour to the United States and Canada in 1955. This plane was destroyed when it landed short of the runway in Lisbon on 25 May 1958. Although it caught fire, both occupants were safe.

Installation is quite straightforward. Extract all files with the "Texture.F-BGVO" path in this archive (making sure that "using folder names" is ticked) to your FSX\SimObjects\Airplanes\MS-760 installation folder, and everything should go to the right place.

For this variant I suggest you use the cream replacement panel designed by Tako_Kichi (file name: ms-760_n760js_cream_panel.zip) which is included into this archive thanks to Tako_Kichi's permission. See the "Read me.txt" included in his ZIP file for installation procedure. 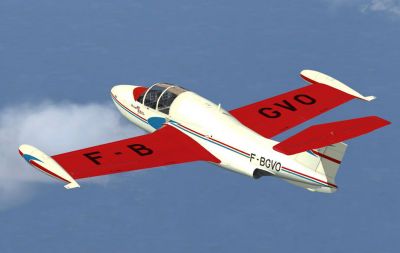 MS760 Paris No.01 Demonstrator in flight.

The archive 760_01.zip has 30 files and directories contained within it.