This is a repaint of Tim Conrad’s MS760 Paris (file names: ms760.zip + MS-760_FIX_KIT.zip on SimOuthouse). It is shown in the very little-publicised markings of 2ème Escadre de Chasse in Dijon.

Installation is quite straightforward. Extract all files with the "Texture.35" path in this archive (making sure that "using folder names" is ticked) to your FSX\SimObjects\Airplanes\MS-760 installation folder, and everything should go to the right place.

Please note: the colour of the tip tank flashes has had to be assessed from B&W photographs and is only guesswork since nobody among the ancients seems to remember of this completely forgotten and therefore very original MS760. I attach a much reduced photograph in order that those in any doubt might be sure that it really did exist. I have been myself completely puzzled when discovering this rarity. So if anybody has any further information, he will be much welcome. 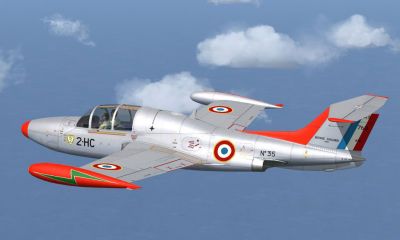 The archive 760_35.zip has 30 files and directories contained within it.