MS760 Paris No.34 FAF ETE 2/65 Rambouillet. This is a repaint of Tim Conrad's MS760 Paris (MS-760PARISJET.ZIP). Aircraft is shown in classic markings for the mid-seventies period and belongs to ETE 2/65 "Rambouillet" which was in charge for the transportation of high-ranking officers serving with the Air Force Headquarters in Paris. Repaint by Michel Gerard.

Installation is quite straightforward. Extract all files with the "Texture.34" path in this archive (making sure that "using folder names" is ticked) to your FSX\SimObjects\Airplanes\MS-760 installation folder, and everything should go to the right place. 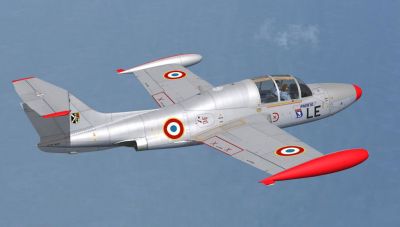 The archive 760_34.zip has 28 files and directories contained within it.

The Morane Saulnier MS-760 Paris was the very first jet I flew as a passenger at the age of 13. The pilot was an Argentine Air Force officer, a highly qualified flight instructor and the leader of an acro team named Escuadrilla Aguila (Eagle Squadron). Up to the day I first flew the Paris, all the airplanes that I had flown were prop ones, not jets. Because I was a member of a group of Aeronautical Boy Scouts -the first one in my own country and in many other parts of the world- we had many occasions to fly and the Argentine Air Force was one of our most qualified tutors. We received points from them for each discipline or ability that we mastered and the best of mines was to identify aircraft and their respective bases in our country. The leader of Aguila became my tutor and after I demonstrated my skills, he enabled me to participate in about 10 Paris flights and to experience more than 3 Gs on my youg body which I indeed enjoyed. Time went by and I found Abel (the leader) already retired and as a chief of all crews that flew for an airline for which I worked 5 years as an external counselor. Our friendship got indeed enriched and we flew together in many occasions. Later Abel became a business pilot and again invited me to partricipate in some Gulfstream IV flights. I could not do thet because I was then living, studying and working in Brazil and it was there that I knew that in one of his best flights Abel crashed with his co-pilot and 5 passengers, among whom counted a famed Argentine tycoon, said to be one of the most corrupt Argentine businesmen. Today I much miss Abel and our funny flights in the Paris Jet.