French AF Beech Expeditor Mk.3N GTLA 2/60. This is a repaint of the Beechcraft D18S originally produced by Milton Shupe and Scott Thomas, adapted for FSX by David Caroll (B18DC05.ZIP). This former RCAF Expeditor Mk.3N (C/N CA83, RCAF S/N 2285) was acquired by the French Air Force in 1959. It is s...

French AF Beech Expeditor Mk.3N GTLA 2/60. This is a repaint of the Beechcraft D18S originally produced by Milton Shupe and Scott Thomas, adapted for FSX by David Caroll (B18DC05.ZIP). This former RCAF Expeditor Mk.3N (C/N CA83, RCAF S/N 2285) was acquired by the French Air Force in 1959. It is shown here in the markings of GTLA (Groupe de Transport et de Liaison Aerienne) 2/60 during the mid-sixties. Aircraft belonging to this unit were kept in pristine condition, hence the unusual, very glossy, nearly chrome-finished aspect of the natural metal surfaces. Repaint By Michel Gerard. 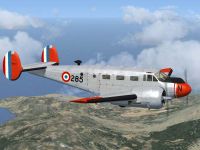 2285 was struck off charge on 18 May 1972 after having served for two and a half years with ELA (Escadrille de Liaison Aerienne) 43 where its registration was 43-BE (F-SCBE).

Installation is quite straightforward. Just extract the contents of this archive with the “Texture.France_285” path to your FSX\ SimObjects\Airplanes\D18SX_DC folder, ensuring that “Use folder names” is selected, and everything should go to the right place.

This plane will appear in the aircraft selection menu as "Beechcraft Expeditor Mk.3N French AF GTLA 2/60". 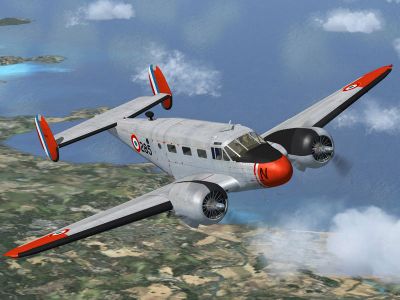 The archive beech_285.zip has 25 files and directories contained within it.