US Air Force B-1B 85-0061 "French Connection". This aircraft was delivered to the 96th Bombardment Wing at Dyess AFB on March 18, 1987. It was given the name "French Connection" and wore no nose art. The aircraft was sent to the Paris Air Show in June 1987. In 1991 it was transferred to Ellsworth AFB where it was renamed "Maverick" with nose art added. This texture set requires the Virtavia B-1B Lancer for FSX. Repaint by Frank Safranek.

1) Copy the folder "texture.5061_paris87" to your "SimObjects/Airplanes/Virtavia B-1B Lancer" folder.
2) Add the following to the "Aircraft.cfg" file. Edit the "fltsim.xx" to be the next available number.

[fltsim.xx]
title=Virtavia B-1B Lancer French Connection
sim=Virtavia_B-1B
model=1B // empty bays so zero out payload and External1 and External2 fuel tanks
panel=
sound=
texture=5061_paris87
KB_checklists=lancer_check
kb_reference=lancer_ref
ui_manufacturer=Rockwell
ui_type=B-1B Lancer
ui_variation=96th BMW(H), Dyess AFB, TX 1987 "French Connection" // Paris Air Show 1987
ui_typerole="Bomber"
ui_createdby="Virtavia"
atc_heavy=0
visual_damage=1
atc_id=85-0061
atc_airline=Air Force
atc_flight_number=061
atc_parking_types=MIL_CARGO
description=Virtavia 2010\n\nThe Rockwell B-1B "Lancer", affectionately known as the "Bone" to its crews, is a key element of the American Strategic Long Range bomber fleet. A development of the cancelled B-1A, the aircraft - while not technically stealth capable - still presents a fraction of the radar profile of the B-52 and incorporates extremely advanced navigation, weapons, and avionics systems. Its swing wing technology, combined with four 30,000-lb thrust turbofan, engines creates a beautiful, fast, and lethal package. The development of this successor to the B-52 began in the early 1960's and resulted in a contract being awarded to Rockwell in 1970. The B-1A first flew in 1974 but soon ran into political trouble. The project was cancelled in 1977 when only 3 prototypes existed. 1981 saw Ronald Reagan order a fleet of 100 B-1Bs, the last of which were delivered in the early 1990's. Designed for low-level, high speed penetration, the B-1B saw action in the Kosovo conflict and second Gulf War.\n 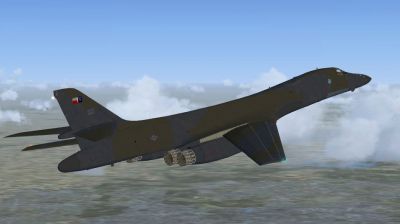 The archive b1b_5061.zip has 19 files and directories contained within it.