German Democratic Republic MiG-21 demo version. The Mikoyan-Gurevich MiG-21 (NATO reporting name "Fishbed") is developed in the Soviet Union interceptor. Already in 1959 put into service, the MiG-21 is the most produced combat aircraft since World War II and the most numerous jet aircraft ever, w...

German Democratic Republic MiG-21 demo version. The Mikoyan-Gurevich MiG-21 (NATO reporting name "Fishbed") is developed in the Soviet Union interceptor. Already in 1959 put into service, the MiG-21 is the most produced combat aircraft since World War II and the most numerous jet aircraft ever, with about 11,000 copies. With more than 50 years of production, it is also the longest-built fighter aircraft around the world and stood at about 50 Air Force on four continents. It also makes Aircraft with more than 20 versions in four generations. Among other things, the legendary single-seat variant of MiG-21 MF and two-seat variant of the MiG-21 US. Also be produced in the People's Republic of China today MiG-21 variants, known as the J-7. Even today, includes some 500 MiG-21 and more than 1000 J-7 / F-7 (Chinese copies) to the inventory of the Air Force in the world. Not least, the MiG-21 was the most important Fighter aircraft of the Air Force / Air Defense of the GDR with more than 20 years. By Andreas Meyer.

Technical data of the MiG-21:

1.) Unzip the contents of this file to a temporary directory of your choice 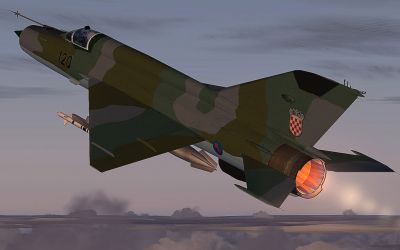 The archive mig-21_demo01b_fsx.zip has 17 files and directories contained within it.

This is NOT germany , is a Croatian Mig-21bis just cheking 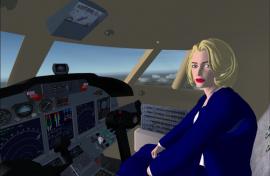