The RCAF acquired its first examples of the Dakota in 1943 and they were used in various theatres including in Canada, Europe and South East Asia. After World War II many RCAF Dakotas were passed on to Trans Canada Airlines. The Dakota was the main RCAF post war transport until the arrival of more modern types like the CC-119 Boxcar, Northstar and Cosmo. In addition to the transport role the post war Dakota was operated in other roles including Search and Rescue, target tug and as airborne navigation trainer for CF-104 Starfighter pilots.

To Canadian civil register as CF-PIK, registered to Arctic Air of Edmonton, Alberta in 1976. Later C-FPIK, with Chaperal Charters of Dorval, PQ, this registration cancelled on 12 October 1982. To Air Inuit of Kuujjuaq, PQ, this registration cancelled on 22 March 1984, when aircraft was exported. To US civil register as N53NA, then N133FS with GD Aircraft of Atherton, California by 2006.

These are texture files only!
Prior installation of Manfred Jahn's outstanding FSX Douglas C-47 Skytrain Exterior Base Pack.
Flename: c47basepack.zip is required.

Copy the texture.RCAF_KN269 folder to the aircraft folder.

Add the following lines to your respective aircraft.cfg-file, replacing the "[fltsim.X]" by the next number in order.

Flight simming may harm you.
These files won't.
They are freeware and must remain FREE!

DO NOT EVEN TRY MAKING MONEY WITH IT!

Many thanks to Manfred Jahn for creating this amazing "Dizzy Three" and sharing it with the community! 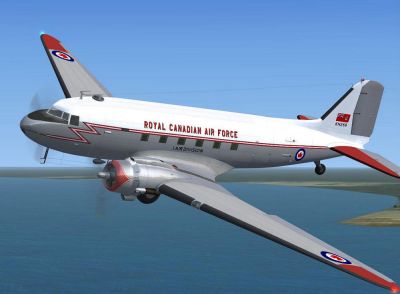 The archive rcaf_kn269-1.zip has 22 files and directories contained within it.