FSX/SP2 Cessna Citation 500 on the ground.

This is a complete Model made by compiled XML code in MDL format ,in other words is my first original FSX-SDK-SP2 , NOT COMPATIBLE WITH FS004.

All repaints require my permission before release. Repaints for commercial purposes are forbidden.

The highly popular Cessna 500 Citation and 500 Citation I pioneered the entry level light business jet market, and their success formed the basis for the world's largest family of corporate jets.

Cessna became the first of the big three American manufacturers (Piper, Beech and Cessna) to develop a jet powered transport. In October 1968 Cessna announced its plans to build a new eight place jet powered business aircraft that would be capable of operating into airfields already served by light and medium twins. Dubbed the Fanjet 500, the prototype flew for the first time on September 15 1969. Soon after the new little jet was named the Citation.

A relatively long development program followed, during which time a number of key changes were made to the design including a longer forward fuselage, repositioned engine nacelles, greater tail area and added dihedral to the horizontal tail. In this definitive form the Citation was granted FAA certification on September 9 1971.

Improvements including higher gross weights and thrust reversers were added to the line in early 1976, followed shortly after by the introduction of the enhanced Citation I later that same year. Features of the Citation I were higher weights, JT15D-1A engines and an increased span wing. A further model to appear was the 501 Citation I/SP, which is certificated for single pilot operation. The I/SP was delivered in early 1977.

Production of the Citation I ceased in 1985, its place in the Citation line left vacant until the arrival of the CitationJet (described separately) some years later Aircraft created in GMax. Includes interactive virtual cockpit, full moving parts and special animations front cargo and passenger door. Custom sound set included.

All the Dynamics where entirely made by Brett Henderson, and much advice came from him. He was extremely demanding (Typical in real Pilots) which improves the plane, becoming very realistic..

Thanks to Freeflight Design Shop Design Forums and their community (as Usual) for their great help & advice.

Specially to Bill Leaning (Fr.Bill) ,who taught me enough to make an FSX airplane , his tutorials ,and his teaching for the designers community is something that deserve our thanks in the name of all designer's.

And special thanks to Matt Fullick (Expat) who provided me with more than 60 real photos of different models of citations among 500/550 ...they really helped me a lot, and some of the maps are made from his photos.

This file is freeware. Any use for commercial purposes is strictly forbidden. Do not make money from it in any way.

All my FS aircraft were created in GMax entirely by me.

Very Simple, unzip the file and place Citation I/500 folder in: 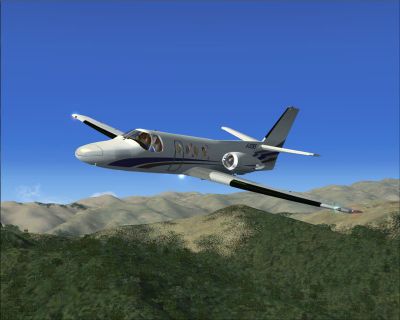 Simply run the FSX Cessna Citation 500-Setup.exe​ install file to install into your copy of FSX, FSX:SE and P3D (all versions). The full source files are also included for manual install if you prefer.

The archive cit_i500.zip has 194 files and directories contained within it.

Having long held a passion and enjoyment for using Cessna aircraft in flight simulators, it was safe to say that I was more than delighted to see the release of this excellent modification for FSX. Having made sure I was using the Service Pack 2 installation (it’s needed) I got myself into FSX and into the cockpit of the new Cessna Citation 500. Everything immediately felt so very familiar to all of the old Cessna flights I’d taken, but that’s not supposed to be a bad thing. They are so popular for a reason, and this mod does the flight range so much justice.

Toying around with the interactive virtual cockpit, I found it incredibly easy to navigate even the more advanced features that come with a Cessna. Again, the familiarity played into my hands as I was able to more or less get going – if you’ve spent time in Cessna jets before you will probably find getting into the cockpit so much easier than it is with many other brands of aircraft. It’s described as the perfect “entry level” jet and for beginners this would be a complete dream to learn the intricate and exciting nature of FSX with.

Thanks to this friendly and engaging style, using the Cessna Citation 500 is incredibly enjoyable. It makes getting even the most awkward of flights dealt with much easier than other products, despite the fact it’s around 40 years old in age! It shows that, like a fine wine, the Cessna Citation has always been able to keep up with many of its successors in terms of style, comfort and class. Business jets are always incredibly easy to fly, but this takes it another level and shows why it’s still in popular circulation four decades on after it was first created.

This dedication to quality and comfort has always been a big part of Cessna aircraft and you can definitely see why the legacy has been so popular. You’ll be able to get used to the user-friendly cockpit in no time at all, whilst also being able to thoroughly enjoy the speed and power this can provide. For a business jet, most are expecting it to be fairly mediocre in its ability to boost through the skies but thanks to its JT15D-1A engines it can hit considerable speeds without too many problems, giving you versatility and control in a staggering abundance.

Whilst the production of the aircraft stopped in the mid-1980s, it was a hugely successful part of the Cessna range and is still used to this day, even outside of simulations. I’d highly recommend this aircraft to anyone from long-term Cessna admirers to those who are brand new to the world of flight simulation and want to see just how well an aircraft can be shown up when created by a third party team of modders. It’s got that unique feel to it that many aircraft seem to miss, whilst also ensuring you’ve got the power and capabilities you needed.

I'll echo the question.... how do you get rid of the blond bimbo in the copilot seat :)

If it is not one of the fastest business jets, it is great for its beauty, its simplicity, and the aura of an era of the happy 1970s!

Very nice plane (Once I had found it in a random HDD where the installer had created a new folder called FSX with simobjects/planes inside!?!)

Having installed it manually it works very well.

How do you remove the woman in the cockpit?

IF it was made by ALEJENDRO it has to be FANTASTIC EVERYTHING THIS GUY MAKES IS FANTASTIC!

How do I install photo real senory?

Just got this and it's looking fine so far but I do have a problem with not finding the fuel selector, or any fuel system control except the pumps. Right now I'm stuck with drawing from one tank only. Any basic manual for operating this plane?

I don't often fly jets on fsx, (more of a prop guy) but when I do, I fly this! Nice model and looks great

I have downloaded this file, and all is working well> only problem I cannot switch/shut down the engines> can you help please Thanks Danny Spies

How do you activate the thrust deflectors? Otherwise, a great download!

Hi! I downloaded your file and is great... but i need the air file... actually I have some problems with the images