MCDFSXIraq. FSX scenery depicting several forward operating bases (FOBs) in Iraq. Includes a new FSX native object library, see readme for use restrictions. Inspiration goes to the U.S. military personnel who go above and beyond on a daily basis. By Michael Carr - MCDesigns.

MCDFSXIraq. FSX scenery depicting several forward operating bases (FOBs) in Iraq. Includes a new FSX native object library, see readme for use restrictions. Inspiration goes to the U.S. military personnel who go above and beyond on a daily basis. By Michael Carr - MCDesigns. 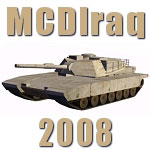 FREEWARE Scenery depicting areas of operations loosely based on the operation Iraqi freedom war. This scenery was designed from a ground level and best suited for helicopter ops, but includes something for the fixed wing jockeys as well.

The forward operating base (FOB) at Habbaniyah, Iraq loosely based on the real Camp ManHatten. Includes reworked ADE file, landclass, new roads with animated traffic, new U.S. military objects and base at the airport. and a combat scene north of the airport in Habbaniyah.

A combat medical center north of Habbaniyah with new objects, landclass and a saved flight for location.

A combat scene in Fallujah with new U.S. military objects, effects and a saved flight for location.

See the included MCDIraq saved flights for locations. These are all in the default Bell with clear weather at dawn.

This scenery includes a new library with FSX native objects designed by me. Feel free to use them in any other FSX "personal" sceneries, BUT this library is not to be uploaded to any other site or outside of this package. If you wish to upload any scenery you make that uses these objects for FSX, You MUST include info on where to get this addon so they will be able to use your scenery. I spent too much time on this and prefer to keep this package together in one piece.

Installation: unzip this into a temp folder. Open the MCDIraqflights zip and drag the flight files into your "Flight Simulator X Files" located in "your Documents". Copy the MCDIraq folder to the scenery directory of your choice (I have a folder outside of FSX called "FSX Scenery"). Start FSX, then go to the scenery library, select the MCDIraq scenery and add to the library. To start a flight at one of the scenery areas, hit the "load a flight" tab and choose on of the MCDIraq flights.

Included is an effect file. Back up your original fx_dirtcrash file and replace with the one included in this addon to see the explosion effects.

Some of these objects are FSX versions of the ones in my FS9 Modern Military package (MCDMil.zip at AVSIM). many of those FS9 objects work fine in FSX and can be added to these sceneries if you wish which is why I did not recompile all of them for FSX, only the ones that had issues and the ones I changed (more detail/retextured, etc)

Credits/thanks:
All of my U.S. military brothers and sisters for their service and the images they share with us on their experiences in OIF.
Michael Allen Richards for his shared animated fliag macro which I modified.
Holger Sandmann for his ongoing assistance when I have questions.
My beta testers, Panther (Kofi), Simfreak (Erik), Jeansy (Matt), Mickoo (Michael Davies) and Nick Churchhill whose assistance was very valuable in bringing this package to life.

Thanks for the support, more to come!!

The archive mcdiraq.zip has 96 files and directories contained within it.

This scenery rocks, and thanks so much for allowing us to use the military objects in our own custom scenerys. Well done and thank you again

How about afghanistan now, i'm trying to build something but have a real handicap.