RAF Lasham. RAF Lasham opened in November 1942 as a forward fighter airfield. It was situated six miles southeast of Basingstoke in Hampshire, UK. It was initally home to 38 Wing, Army Co-operation Command and was transferred to Fighter Command, in June 1943. The base became home to 175 Sqn flying Hurricanes and Typhoons, 181, 182 and 183 Sqns flying Typhoons, 412 and 602 Sqns with Spitfires. In August 1943 it was transferred to No 2 Group, Tactical AF, becoming home to 320 Sqn flying Mitchells, 107, 613 and 305 Sqns flying Mosquitoes. These squadrons were heavily involved in Operations Overlord and Market Garden. In November 1944 Lasham was transfered to No 84 Group Support Unit and used for the training replacement aircrews. After the war it became a Group Disbandment Centre. and was finally home to 49 MU and General Aircraft Ltd based servicing RAF Mosquitoes. By Chris Smith.

The airifeld closed in 1948 and has been used since for gliding and aviation engineering.

Ted Andrews's RAF Hangars Library and other excellent buildings, only takes a minute to add and is well worth it. This scenery is for FSX only. Just add UKXX file in the usuall place, ie, your addon scenery scenery folder, C:\Program Files\Microsoft Games\Microsoft Flight Simulator X\Addon Scenery\scenery. Start up FSX and then go into your settings, Scenery Library then once the scenery window comes up just click ok. The scenery will load automaticly.

You will find by searching either RAF Lasham or typing in UKLQ as the airport code. 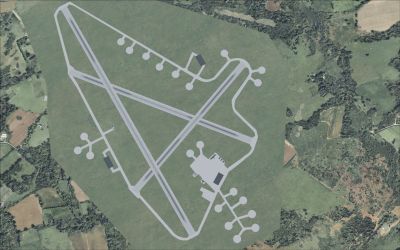 The archive lasham-1.zip has 14 files and directories contained within it.