Carrier Tracks Volumes 1 And 2. Volume 1 places Nimitz-class carrier models as moving AI boat traffic in Hawaii and four coastal locations, situated by Marine Corps and Naval air stations. Note: Volume 1 has been updated since the first release. If you have the original version, delete it; this o...

Carrier Tracks Volumes 1 And 2. Volume 1 places Nimitz-class carrier models as moving AI boat traffic in Hawaii and four coastal locations, situated by Marine Corps and Naval air stations. Note: Volume 1 has been updated since the first release. If you have the original version, delete it; this one has everything you need. Volume 2 adds Nimitz-class carriers in more locations: near Naval air stations in the United States, around the Hawaiian islands of Kauai and Maui, and Tokyo Bay. It also includes two tracks for the French carrier "Clemenceau": one in the Mediterranean, the other in the Caribbean. For each track, a map is provided as well as a sample flight that starts on the carrier. Requires: freeware "FSX Acceleration USS Nimitz and Eisenhower" by Javier Fernandez (USS_NIMITZ_IKE.ZIP). Instructions for downloading the French "Clemenceau" (VEH_CLE.ZIP) are provided in the readme. By David Wilson-Okamura.

Volume 1 places Nimitz-class carrier models as moving AI boat traffic in Hawaii and four coastal locations, situated by Marine Corps and Naval air stations. NOTE: Volume 1 has been updated since the first release. If you have the original version, delete it; this one has everything you need.

Volume 2 adds Nimitz-class carriers in more locations: near Naval air stations in the United States, around the Hawaiian islands of Kauai and Maui, and Tokyo Bay. It also includes two tracks for the French carrier "Clemenceau": one in the Caribbean and one in the Mediterranean.

Operations in the Pacific use the "U.S.S. Nimitz." Operations in the Atlantic use the "U.S.S. Eisenhower." Carriers begin sailing at approximately 0700 or 0800 local time, depending on time of year, and continue through the day and night. Carrier speed is set at 25 knots; knowing this is useful when you are searching for them using AI Traffic Map (installed as part of the SDK Traffic Tools). On AI Traffic Explorer, they appear as CVN68 (for the "Nimitz"), CVN69 (for the "Eisenhower"), and VEH_Clemenceau (for the "Clemenceau"). Around Cuba, the "Eisenhower" sails at 26 knots instead of the usual 25, so that it can complete the route in under 24 hours.

Sample flights are included for each track if you want to start on one of the carriers. Note: each flight begins paused. Press pause again (usually the p-key) in order to begin. Be ready on the brakes, though. When a flight is saved, the relative momentum -- of aircraft and carrier -- is not saved with it. When you load the flight later, the carrier's momentum is conducted suddenly to the aircraft, and you can either roll off the deck or, with a small plane like the Goshawk, pitch over backwards. To compensate for this, I have parked the aircraft in deck positions that you would not see in real life. Another way to compensate is with slew mode. After the flight loads, but before you un-pause, go into slew mode with the y-key. Then un-pause with the p-key. Then exit slew mode, by pressing the y-key again. This method works, but I prefer not to use it, because it seems to affect the catapults; also, because the carrier keeps moving while you are in slew mode, it will create problems for any flights that you save on deck.

If you'd like to alter a saved flight to use a different aircraft, you can use one of two methods. One is to load the flight, switch your preferred aircraft, and resave the flight. The other method, which requires a little more knowledge, is to open the folder where your FSX flights are saved and locate the appropriate FLT file (e.g., "Carrier Guantanamo Bay.FLT"). Open it for editing in Notepad, and look for lines like the following:

Replace "FA-18 Hornet 6" (or whatever you find there) with the Title of your preferred aircraft, as found in the Title line of the aircraft's aircraft.cfg file. If method #2 doesn't make sense to you, use method #1.

If you want to make your own saved flights that begin on the carriers, I have two suggestions. First, after you save your flight, edit the .flt file with Notepad and change the line "SimOnGround=True" to "SimOnGround=False". Otherwise you'll start in the water and always crash. Second, pause your flight before saving; or, if you forget, edit the .flt file so that "Pause=True" under [Options].

Want to modify my tracks or just post them in someone else's file library? You have my permission, provided you do not charge a fee. If you want to study my tracks, select them in Clark's Boat Compiler and click "Decompile."

2. Copy the .bgl files from the .zip archive that you downloaded into an active scenery folder. If you don't know what you're doing, a safe bet is usually:

3. If you want to use the sample flights, copy the .FLT, .WX, and .FSSAVE files into the folder where your other flights are stored. This folder is usually named "Flight Simulator X Files" and can be found in the "My Documents" folder if you are using Windows XP, or the "Documents" folder if you are using Vista/Windows 7. If you don't see any files with the .FLT extension, it's because Windows Explorer hides well-known file extensions by default. You can turn this off in Windows Explorer, or just look for the file name that goes with the other two flight files (.WX and .FSSAVE).

5. If you want to try one of the saved flights, their names all start with the word "Carrier."

If you don't see the carriers, make sure that your boat traffic is set to 5% or higher. Also, be aware that the ocean is a big place and finding the boats -- especially on some of the longer circuits -- can take awhile. To test if it's working, try one of the included flights that start with an aircraft on the carrier deck.

1. Acceleration add-on for FSX. There are freeware add-ons that enable carrier operations, but Acceleration requires no additional set-up and includes the F/A-18 Hornet whose gauges are used by many freeware planes.

2. Freeware T-45 Goshawk trainer and F-14 Tomcat by Dino Cattaneo. These two aircraft both require Acceleration for gauges. If you've tried carrier operations before and given up because it all happened too fast, try the T-45 Goshawk and work your way up.

1. Oahu, circles the island beginning and ending at Pearl Harbor. Accessible from Naval and Marine Corps Air Stations around the island. Included flight starts on a carrier south of MCAS Kaneohe Bay (PHNG), using the Acceleration Hornet (in Marine livery).

2. San Diego, travels up and down the southern California coast, from San Diego to Point Mugu. Accessible from NAS Point Mugu (KNTD), NAS North Island (KNZY), and MCAS Miramar (KNKX). Included flight starts on a carrier north of San Diego, configured for T-45 training quals. Aircraft is the freeware T-45 Goshawk by Dino Cattaneo, but if you don't want to install that you can switch to another aircraft after the flight loads (or edit the .flt file to accomplish the same result).

4. Pensacola, hugs the coast from Mobile Bay to Fort Walton beach. Accessible from Eglin AFB (KVPS), NAS Pensacola (KNPA), and NAS Whiting (KNSE). Included flight starts on a carrier configured for T-45 training quals. Aircraft is the freeware T-45 Goshawk by Dino Cattaneo, but if you don't want to install that you can switch to another aircraft after the flight loads (or edit the .flt file to accomplish the same result).

5. Key West, circles the archipelago from Seven Mile Bridge to the Marquesas. Accessible from NAS Key West (KNQX). Included flight starts on a carrier north and west of the airfield, using the Acceleration Hornet.

1. Marseille to Nice, a route for the French carrier "Clemenceau," with lots of airbases inbetween. Included flight starts on the carrier deck with the Acceleration Hornet (white livery).

2. Oceana, Virginia. This is one of the places where the U.S. Navy trains fighter pilots. Carrier is offshore and accessible from NAS Oceana (KNTU) and NS Norfolk (KNGU). Included flight starts on the "U.S.S. Eisenhower" with the Acceleration Hornet (USN livery).

4. Cuba. A highly unrealistic track from NAS Guantanamo Bay (MUGM) to NAS Key West (KNQX), hugging the northern coast of Cuba. Cruise takes almost 24 hours each way. Included flight starts on deck, about 15 minutes out of Guantanamo. Microsoft spent some time on the scenery here, so have a look. No provocation to Cuba is intended with this flight, which is why we're using the unarmed NASA version of the Acceleration Hornet.

5. Kauai. A scenic circuit of the Garden Isle. Kauai is supposedly the wettest place on earth, but things are dry for the moment. Military jets are welcome at the Barking Sands Pacific Missile Range Facility Airport (PHBK).

6. Maui. Another scenic cruise, which also takes in the tiny, crescent-shaped atoll Molokini.

7. St. Maarten and St. Barthelemy. This scenic route follows a figure-eight between the two islands. As befits this part of the world, the French carrier "Clemenceau" is used instead of the American "Eisenhower."

Thank you to Javier Fernandez, for his freeware models of the Nimitz and Eisenhower; Sylvain Parouty, for his freeware Clemenceau; Lamont Clark, for his AI Boat Compiler program; Dino Cattaneo, for his freeware Goshawk and Tomcat; the forum members of Sim-Outhouse and Google Earth. Thank you also to Microsoft: in working on the sample flights, I've been struck several times by how good the default scenery is in many parts of the world. 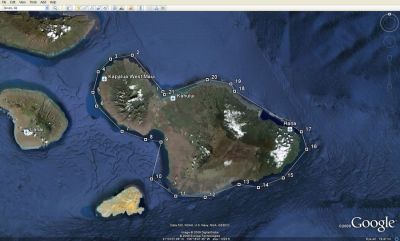 The archive carriertracks1and2.zip has 65 files and directories contained within it.