This is the my first scenery package of California Missions for FSX, and includes the following mission:

I have decided to include all previous missions in each scenery package as I release new ones. This will result in larger downloads, but will vastly simplify installation and update any previously installed missions I may have changed. Therefore:

Before installing this package, check the above mission list. If you have missions NOT listed above, you have already installed a later California Missions version! DO NOT INSTALL THIS SCENERY PACKAGE! Installing earlier mission packages over newer ones will probably screw things up!

There are many ways to install the files. Shown below is the way I believe is the easiest. Your FSX drive and path is probably different than mine so I do not show the entire path below. Where I indicate "FSX" you would use your FSX directory.

1. Unzip the CMFSXP01.zip file to a tempory directory/folder. (Be sure to allow the paths to be maintained.)

2. Open Windows Explorer and look at the tempory folder. You will see three main folders:

3. Using Explorer, copy (or move) the effects files to the FSX/Effects folder.

4. Drag the California_Missions-FSX and RWE-Library-Objects folders to your FSX/Addon Scenery folder. (There may be a file overwrite warning - allow any overwrites.)

5. If you have previously installed any of my FSX missions, you are done! If not...

6. Start FSX and from the World, Scenery Library screen, select Add Area and add the California_Missions-FSX and RWE-Library-Objects scenery files that are now located in the FSX\ADDON SCENERY directory. This does require two entries for this scenery, one for the scenery and one for the object libraries, but that will solve future installation problems.

Megascenery Earth California from PC Aviator Inc. is not required for this scenery, but without it the scenery looks very unrealistic.

The MegaScenery Earth section used in this scenery is California #11.

Note: This section will also be used for the Carmel Mission.

This scenery also uses these specific addon library files. All other objects are either default FSX objects or are my objects supplied in this file.

Garvin Barnicoat for his organpipe cactus API macros. I have changed the macros some, but still use his texture files. Jim Crummy for his railroad car API macro. Allan Wheeler for his California Coast Scenery. I didn't actually use it in the creation of these missions, but after thinking about it for several years, his scenery inspired me to start this project. He also helped with several problems in figuring out how to do FSX objects. The entire Airport for Windows and the newer SceneGenX development team. These freeware packages make this all possible. While I didn't use these too much for the FSX versions of the California Missions, I still use them extensively for the FS9 versions, and then convert to FSX. Seev Kahn and Israel Roth for RWY12 and all the people who contributed the object libraries. Michael Carr for the Military Objects Library. Ron Silent for his backhoe texture. Jon Patch for his library objects.

I have collected hundreds of macros over the years, many of which I don't have a clue where they came from. If I have missed anyone, let me know so I can include acknowledgements in future releases.

The author cannot be responsible, in any way, for any problems occurring from the use of this software. If you think it is causing problems, delete it.

This zip file may be freely distributed to other sites (only if they do not charge a fee) in its complete and original form only. I retain all rights to this file and all the files contained within.

Thank you for trying my scenery, hope you enjoy it. 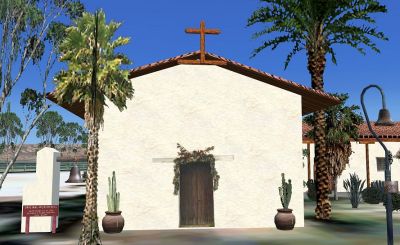 The archive cmfsxp01.zip has 358 files and directories contained within it.