Kandahar v1. Kandahar, Afghanistan. Kandahar (OAKN) is for FSX with Acceleration running in DX10 or DX11. Version 1 is an extensive and detailed version of the busiest single-runway airport on the planet. Parking spaces include four cargo, 11 military cargo, 69 military combat (17 coded for A10s), two Ariana Afghan Airlines spaces, 79 Heli Traffic 2009 compliant helicopter landing spots, and a fuel space that can fit a 747. By Dan Mesmer.

Screenshot of C-130's on Whiskey ramp.

1. Copy the "Kandahar Ver 1" folder (including the folder, itself) to the FSX "Addon Scenery" folder.

2. In FSX, go to "Settings," and under "Other settings," click the "Scenery Library" button.

4. Navigate to the "Addon Scenery" folder, and then double-click on the folder to open it.

5. Click once on "Kandahar Ver 1," and click the "OK" button. (After clicking the "OK" button, Windows 7 users will also need to click once in an empty space below the folder names in the "Select Scenery Directory" window).

6. Under "Available scenery areas," "Kandahar Ver 1" will now appear at the top of the list. Be sure "Enabled" is checked. Then click the "OK" button.

Setting weather visibility at 10 miles will enable FSX to show Kandahar as it is often seen in photos and videos. Kandahar is in a semi-arid region, and the air is often full of dust. There are times, though, when visibility is nearly unlimited. Of course, there are also times when a sand storm hits the airfield, and visibility goes down to only a few feet.

A scenery complexity setting of "Dense" or higher shows everything. A setting of "Normal" blocks display of some of the open hangars, but everything else is displayed. Settings of "Sparse" and "Very Sparse" show significantly less.

Open the "Helipad Reference" folder, and double-click on "Helipad Reference.htm." This is a visual reference to be used in setting up both user helicopter and AI helicopter flights. All helipads at Kandahar are shown, and both the FSX and the Heli Traffic 2009 helipad numbers are shown for each helipad. The location and heading of each helipad is based upon satellite imagery.

The "Slingload Flight" folder contains files to implement a slingload flight. Copy the files (but not the folder itself) to the "Flight Simulator X Files" folder within your "Documents" or "My Documents" folder. A flight called "Kandahar Sling" will now be listed on the FSX Free Flight's "Load Flight" menu. The flight uses an AgustaWestland EH-101 that takes off from helipad 36. The slingload is a pallet of boxes that is located at the opposite end of the airfield near helipad 32 in a portion of the airfield that is used by the Afghan Air Force (AAF). Do whatever you wish with the pallet of boxes, but watch out for the power lines.

Kandahar Ver 1 contains 17 parking spaces coded for A10 "Warthogs." There is a freeware file called "hoga10.zip" that is available at FlightSim.com and elsewhere. The file contains a freeware A10 that can be used both as a user aircraft and as an aircraft for AI flights.

The files in the "A10 Enhancements" folder contain texture conversions that I have done to add DirectX 10 and DirectX 11 compatibility and, therefore, enable the A10 to render properly in FSX's "Preview DirectX 10" mode. I have made no changes whatsoever to the original model nor to the livery. I have simply converted the textures for use with DX-10 and DX-11, and I have saved the textures using DDS compression to make rendering faster.

To enable AI A10s to find and use the A10-coded parking spaces at Kandahar, copy the "Aircraft.cfg" file from my "A10 Enhancements" folder to the "358th FS A-10 ThunderboltII" folder, overwriting the original file. The only difference in the files is that I have added the line "atc_parking_codes=A10" (without the quotes) to the "[fltsim.0]" section of the Aircraft.cfg file. The same technique could be used in the aircraft.cfg file of any A10 to enable the A10 to use the parking spaces that are coded for A10s at Kandahar. Just be sure to use "A10" with no dash between the "A" and the "10" if you use the technique with an A10 that you already have in your FSX hangar. Remember, too, to add the same line to each texture referenced within your aircraft.cfg file if your A10's aircraft.cfg references more than one texture.

An IED has hit a vehicle on a road outside the airport. It's not the highway that runs by Kandahar's gate, but a road that is a bit more distant. Flying a helicopter on a heading of 80 degrees from near the center of the airfield will bring smoke into view. Continue flying toward the smoke to see the aftermath of the explosion.

While I was developing Kandahar, some real-world tanker trucks came under attack in Pakistan. That prompted me to add a tanker truck that had been attacked. I allowed my tanker truck to make it into Afghanistan, but it is closer to the Pakistani border than it is to Kandahar. The aftermath of the attack can be seen at N 31° 9.84' E 66° 9.03'. The tanker truck can be found by using the highway that runs by Kandahar's gate as a visual reference. Follow the highway south, and eventually you will come across the tanker truck.

I have already created a Heli Traffic 2009 landing spot at the site of the tanker truck attack (and at other remote Afghanistan sites) for use by AI helicopters. If a Heli Traffic 2009 flight is scheduled using the attacked tanker truck's landing spot, then it would also be possible to find the location of the attack by following the AI helicopter from Kandahar to the tanker truck. See "QUICKLY ADD A SET OF REMOTE AFGHANISTAN LANDING SPOTS TO HELI TRAFFIC 2009."

Remote landing spots have been associated with airports having the following ICAO codes:

There are two options for adding the additional landing spots.

1. TO MAINTAIN A SINGLE XML FILE FOR ALL HELI TRAFFIC 2009 LANDING SPOTS:

2. TO USE A SEPARATE FILE FOR THE ADDITIONAL LANDING SPOTS:

Copy the AfghanistanLandingSpots.xml file to the Heli Traffic 2009 folder within the Documents folder. Be sure to copy the .xml file rather than the .txt file.

This is a great airport to drive. There are openings in all the fences so you can drive everywhere, and there are many details that are likely to be seen only by taking a drive through the airfield. Additionally, as is the case in real life, there is a perimeter road. A drive around the entire perimeter makes one aware of just how large Kandahar Airfield is.

Q: Why all the power lines?

A: One of the first things that struck me when first researching Kandahar is that there are power lines everywhere. Apparently, it takes a lot of power to conduct a war.

Q: Why all the stuff setting around outside buildings?

A: Because, at the real airfield, photos show hundreds of times more stuff setting around outside buildings, and I thought I should at least show some of it.

A: Because I chose not to take the time to model the main terminal. I may do so later, though, and add a realistic model of the terminal to a future update of the airport.

Q: Why does the alignment of the trees appear to be artificial?

A: Most of the trees at Kandahar airfield were planted. There has been an international effort over the years to help Afghanistan recover from decades of deforestation.

A: It's in "an undisclosed location."

Q: What aircraft are seen at the real-world Kandahar?

A: Here's a list of most of the aircraft that are likely to be seen at Kandahar:

Q: One of the accompanying screenshots shows Predator UAVs parking in specific hangars. What has been done to reduce the likelihood that other aircraft will use those hangars?

A: Although the parking spaces in the hangars used by Predators are not coded specifically for Predators and, therefore, have the potential for use by other aircraft (for users who do not have a Predator model), most aircraft will find other spaces to be more attractive and will stay away from the Predator spaces. This is true because military cargo aircraft will seek military cargo or cargo spaces, A-10s will seek the spaces coded specifically for A-10s, and military combat aircraft will seek the military combat spaces that have a 7-meter radius rather than the larger 8-meter radius spaces that the Predators need because of their wingspan. If a military combat aircraft were to use one of the Predator spaces, most likely it would be either because the aircraft's wingspan would not allow it to park in a 7-meter space or because there were no more 7-meter spaces available.

Q: Why do some scenery objects disappear at night?

Jim Dhaenens for allowing freeware airport developers to use his radar, hangar and lights models.

David Grindele for his accumulation of freeware scenery.

Guy Diotte for the static A-10 Thunderbolt II ("Warthog").

Islamic Republic of Afghanistan Ministry of Transport and Civil Aviation for publishing detailed information about the airport.

This software is freeware and may be distributed only with permission of the author. No commercial use is allowed without the author's permission.

This software is distributed without warranty of any kind either express or implied. The author is not responsible for any damage caused by this software. 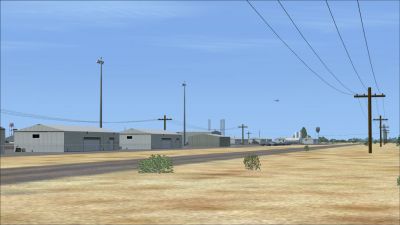 The archive kandahar_ver_1.zip has 118 files and directories contained within it.

I followed the directions to install, and ran into an issue when I attempted step 5 of the installation. I clicked on the Kandahar Ver 1 folder, and clicked ok, and it stepped my into the folder asking for a file, but no files are visible, just folders. Even clicking within the scenery and texture folders, there is nothing to select. As a result, I cannot get this scenery to install as step 6 in not available. Any suggestions?

5. Click once on "Kandahar Ver 1," and click the "OK" button. (After clicking the "OK" button, Windows 7 users will also need to click once in an empty space below the folder names in the "Select Scenery Directory" window).

6. Under "Available scenery areas," "Kandahar Ver 1" will now appear at the top of the list. Be sure "Enabled" is checked. Then click the "OK" button.

Once I installed this, the ILS frequencies for Kandahar disappeared. About to go test with this removed from scenery library.

Can you please tell me how you got the ai to work and which ai you used to get your kandahar to look like that please?