Egypt. Scenery of the whole of Egypt. It contains 22 airports and 416 population centers plus the Temples of Abu Simbel, Pyramids of Giza, Temples of Karnak, Luxor, Edfu, Queen Hapshetsut, Kom Ombo, Philae, Mausoleo Aga Khan, Castle Alexandria, Egyptian Museum of the Cairo, Tahrir Square, whole Cairo enhanced. It permits some circuits on the Nile River and the Suez Canal or Sharm el Sheik and much more. By Toni Agramont. 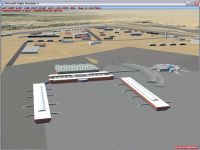 Tourist areas of Sharm El Sheik. The entirety of the beautiful exhumed monuments and recovered by the Europeans from the century 19.

They highlight for their relative accuracy The castle of Alexandria,the mosque of Port Said, Cairo the central station of the railway, egipcian museum,in Tahrir square. In Giza the pyramids and the sphinx

Siwa is a population located in the middle of desert near the Libyan frontier that has evolved around the old Kasbah and she has a mosque very beautifool.Al of Siwa a called aerodrome exists Siwa Oasis North (HE0O) where I have located a NDB frec 455,Se it can usually arrive from the population of Sidi Barrani (aerodrome HE1D) or Mersa Matruh (aerodrome HEMM). In the surroundings of Siwa and skirting the big lakes of fresh water is four nomadic camps with their haimas goats and dromedaries.

Skirting the nilo in south sense has the temples of Karnak,Luxor, goddess Athor,Temple Edfu,temple Hatshepsut,Temple of Kom Ombo Temple of Philae in their island inside the swamp Nasser lake,Mausoleo of the Aga Khan in Aswan. Temple of Abu Simbel.

To the alone tourists they are taught the archaeological egipto located at the banks of the Nile but Egypt this very town. she has numerous cities (most dirty and careless) with modern buildings that should visit one another using the own car. The tourist companies don't elaborate programs to know these areas. I have put many cities to give life to this country that one day was of the Pharaohs and that from the year 664 have been occupied by the Arab that are teachers in manufacturing saucepans to hammer blows and to trade with goats and camels.

The usual thing: in ADDON SCENERY

In "Additional Scenerys". you located all the airports that I have created.

This orientation is alone for the beginners. The old "simu" already knows as mounting it according to your convenience.

To all the designers of macros to those that I have stolen some object to install in this scenario. Thank you. 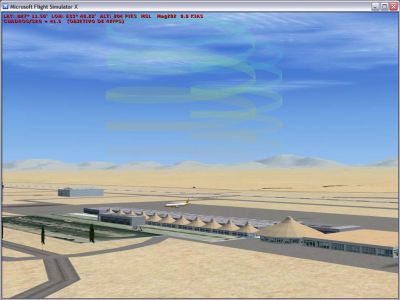 The archive egypt_fsx.zip has 17 files and directories contained within it.

I sure wish I had read the comments first, as I usually do. This installed without any issues, but it causes FSX to crash immediately following take-off from the Cairo airport. Since the developer hasn't responded to complaints, I guess I'll just uninstall it.

Regarding Egypt VFR FSX; same issue as Kondo; program gets Microsoft warning followed by FSX crash and back again to Steam main page. Tried downloading and reinstalling Egypt from other sites and same problem. Tried without mesh add-on and other mesh and same crashes. If I run default Egypt scenery alone, FSX runs perfectly fine. I too welcome suggestions.

I am using fsx acceleration. "Egypt_fsx", but installing and starting up and moving to the airport (HEPS) will cause FSX to crash. Is there a solution? please tell me.