Earhart's Electra L-10 E. A repaint of FS-Design Berlin's Lockheed Electra L-10 modified for Flight Simulator X. Painted as Amelia Earhart's Electra L10 E in what turned out to be the final flight of Earhart's career, and, ultimately, her life, It began on June 1, 1937. Earhart and Noonan left for their round-the-world flight in her twin-engine, red-winged Electra. From Miami, they flew to San Juan. Right before taking off on this leg of the flight, Earhart was quoted as saying, "I have a feeling there is just about one more good flight left in my system and I hope this trip is it. Package includes pictures and history of the aircraft. Textures and updates by Mark Rooks of RSDG Aircraft. 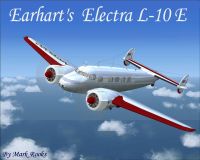 2.Copy the " Earhart's Electra L 10-E " folder and paste it in the main aircraft folder.

The Creations
(Airborne Version)
And the Lord God spoke forth unto the heavens and said "Let there be Airborne". The earth did tremble and quake, and the waters did rise up. The clouds did part, and there came forth a multitude of parachutes which filled the sky. God looked down and saw that this was good. And they were good, for they were AIRBORNE!! God then spoke forth unto the land and said "Let there be Rangers". And all at once the day turned into darkness, and the winds did howl, and the mountains crumbled into the sea. The great rocks did part and there sprang forth a horde of Mephistopheles' disciples wearing Ranger tabs and carrying all manner of deadly weapons. God looked down and saw that this was bad. And they were bad, for they were RANGERS !! Then God spoke forth thrice unto the sky, the earth and the sea, saying "Let there be Special Forces". Lightning did flash and thunder did echo across the sky. Mountains spewed forth molten rock and rained down fire upon the land. Tidal waves surged against the shore, and despair, disorder and turmoil did prevail. Forthwith, there did appear a band of twelve extraordinary men. A few came from beneath the waves. Others jumped from the skies, and still more stalked silently from the forests. Each one was in camouflage battle dress, wearing a green beret. Working together, they brought peace unto the land. God looked down and saw that this was amazing. And they were amazing, for they were SPECIAL FORCES!! Besides himself, God now spoke forth and commanded "Let all ye that be weak in mind and body arise and go forth". And lo, from the abyss they crawled forth with indecision and limped weakly upon the earth. God looked down and saw that they were pathetic. And they were pathetic, for they were LEGS! !**
By Col. Robert K Suchke

The gauges is from the default DC-3 No VC the panel from DS Berlin does not work in FSX update your own is encouraged.

The archive l10eae.zip has 8 files and directories contained within it.

I have been working on amelia's disappearence for a number of years and believe that I have found the solution. My proof requires that I prove what time zone the Itasca was on. In order to prove this, I need assistance in modeling the first 7.3 hours of her flight in the electra 10e. The basic set up would be with two different fuel loads. One with 900 gallons and the other with 1000. true course 78 degrees with wind from the east at 12mph. What I need to know is how many statute miles the plane would have covered in 7.3 hours. The operating parameters are as follows:

I'm working using ubuntu and do not have fsx or I would do it my self so any assistance would be greatly appreciated.

For a detailed discussion of my theory, you may send me an email and I will point you to a web forum in which I detail my theory.

Please believe me, I am confident that I am correct and this info will prove it.

Bit disappointed that when I installed the L10E it has no 3d virtual cockpit, nor does it even have a proper 2d cockpit! The panel and sound is out of a DC3 and has no side view. The exterior view is also very basic. But it was free I guess, so shouldn't complain..