Junkers Ju52 IWC, registration HB-HOS. This aircraft is simply a revision of the FS2004 Passenger In The Cabin Project but is provided in standard VC mode for FSX with the option to convert to PICR operation. Original aircraft from the Junkers Ju52 Factory managing director Pierino Primavesi. Aircraft was "First Round The World". In FSX some period gauges used previously did not work so there have been replacements fitted. An inspection of photographs of the real aircraft seemed to indicated the altitude and VSI gauges are imperial in the modern aircraft update. The aircraft has also flown around the world again in IWC paint. The FSX version is tuned to climb and fly safely at 12,500 feet and because it is based on a PIC version, has full autopilot control including speed and Nav hold. The aircraft can also be setup to drop Swiss Paratroopers or Parafoils by Heather Sherman. The FS2004 sim version on which this FSX project is based used the model Ju-Air JU52 HB-HOT and textures version 6 by Pierino Primavesi. FS2002 PIC Concept by Ross McLennan, July 2007, consolidated update for FS2004 October 2009. FSX version of the aircraft September 2010. Packaged and supported by Ross McLennan. 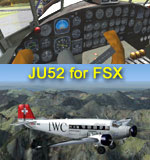 This download is simply a revamp of my JU52 FS2004 Passenger In The Cabin Project for use in FSX. IWC HB-HOS is provided for FSX in VC mode with instructions on how to change the aircraft for PIC operation.

The original FS2004 IWC HB-HOS aircraft is a Version 6 FROM THE JUNKERS JU52 FACTORY. Managing Director: Pierino Primavesi. "First Round The World". In FSX some period gauges used in my previous project did not work so there have been replacements fitted.

The panel layout is slightly changed from that used in my previous IWC HB-HOS for FS2004. A search of photographs on Airliners.net indicated the aircraft, which still flys and has again flown around the world, has a revised panel layout which included imperial gauges for altitude and vertical speed plus more modern attitude and situation indication. A GPS is also fitted at dashboard level

It is not possible to change the cockpit layout to replicate the "modern" aircraft as this is controlled by the original Pierino Primavesi design. The "modification" is simply to substitute non metric gauges for altitude and VSI and re-arrange them into a similar layout. Standard Grumman Goose gauges are used. The more modern situation indication was already part of my original FS2004 project.

An icon in the VC or passengers cabin provides some images of the real and simulated aircraft.

The original overlay windows have been miniaturized so as not to block the forward view and placed on the left of the cockpit. The aircraft can be flown of course via the 2D panel OR from the Virtual Cockpit with additional tools that basically allow the pilot to fly entirely from the VC without returning to the 2D cockpit for flying adjustments.

The aircraft has been re-tuned to climb and fly safely at 12500ft in FSX. This means it may fly slightly nose down at lower altitudes. Because its based on a previous PIC version it has full autopilot control including speed and Nav hold.

The aircraft can also be setup to drop Swiss Paratroopers or Parafoils using the smoke key [i].

I thank Mr Primavesi for the privalege of using his FS2004 aircraft in FSX.

INSTALLATION:
The self extracting exe file should be extracted to a temp folder. Within the generated aircraft folder there is a gauge folder containing two gauges that you may require. Unzip the files to the FSX gauges folder but do not overwrite if they already exist.

Copy paste the effect folder contents to the effects folder in FSX.

Now copy/cut and paste the aircraft folder to the FSX/simObjects/airplanes folder.

When you next run FSX the IWC HB-HOS Junkers aircraft will appear in your Freeflight aircraft listing.

It is recommended that at first use you simply sit in the 2D cockpit and activate the Kneeboard to read the Check and Reference documentation AND THEN FLY.

(3) IF such developed faults occur it is recommended you fly with "Tool Tips" turned off so as to have a measure of control over any such problems.

(4) Flying tool developement occurred at a flatscreen screen resolution of 1280 x 960 (4:3) and at other resolutions might result in slight variations in overlay sizing and positioning. Computer screens in widescreen mode will produce "egg" shaped gauges in the 2D cockpit panel and any overlays in the virtual cockpit.

(5) Tuning the aircraft to climb and cruise at high altitude may mean it will fly slightly nose down at the same ground speeds when at low altitudes.

(6) There maybe no gauge lighting available in the virtual cockpit so night flights will need to be flown from the 2D cockpit.

(7) The forward view from the 2D cockpit may not include the rotating od stationary propeller.

CHANGING THE AIRCRAFT TO PASSENGER IN THE CABIN MODE

Within the aircraft folder there is a sub folder with backup aircraft and panel cfg's which can be used to replace the existing files by copy and paste (donot move them). Then delete the old file and change the name of the new file by rmoving the PICR extension. This will turn the aircraft into PICR mode with revised panel setup notes available as usual in the kneeboard. There are no flights provided to set the aircraft up correctly for the best view. You will simply have to find your own solution. The interior of the cabin, you will note, is extraordinary.

A more permanent solution is to copy the whole aircraft folder and rename it to include PICR and then carry out the above. Both aircraft will appear in the free flight list.

KNOWN FSX ISSUE: In panning and rotating the passenger view you may find the window surround fails to remain solid. Re-adjust the setting to omit the upper and lower parts of the window frame.

This aircraft is provided as freeware and is not to be used for any commercial purpose. I take no responsibility for any conceived problems as a result of installing this software. You install it at your own risk.

The archive ju52_iwc_fsx.zip has 7 files and directories contained within it.

Great job! It is really cool to sit in the passenger cabin and look out the window . Thanks!