Beechcraft D18S Passenger In The Cabin. Two complete aircraft, wheeled and amphibian by Ross McLennan, Milton Shupe, Scott Thomas, and Andre Folkers with floats by B. Ortis. With the permission of the FS2004 copyright holders, these two original FS2004 D18S aircraft have been adjusted to climb an...

Beechcraft D18S Passenger In The Cabin. Two complete aircraft, wheeled and amphibian by Ross McLennan, Milton Shupe, Scott Thomas, and Andre Folkers with floats by B. Ortis. With the permission of the FS2004 copyright holders, these two original FS2004 D18S aircraft have been adjusted to climb and fly safely in FSX at an altitude of 16,300 feet using the Passenger In The Cabin (left side) concept from FS2002. Original aircraft documentation is provided and gives information and the necessary acknowledgements to those responsible for the original FS2004 design. The aircraft are "dressed" to represent a ficticious company called "Grand Swiss Alp Tours (GSAT)" using textures by the "Swiss-Eagle" Patrick Nadig and flying out of Thun, Sion and Ulrichen in the Swiss Alps. Some sim icons are replaced with multi function versions by Jean-Pierre Langer. The ficticious flights are designed to give the best possible passenger views of the grand scenery from a left side cabin window. Aircraft can also be adjusted for right side views and have also been flown in Alaska and The Rockies. In Switzerland see the Eiger, the James Bond Schilthorn, the Kandersteg, the Matterhorn, the Rhone and Grosser Aletsch Glaciers and fly a circuit of Mont Blanc in search of the Mer de Glace. Land the amphibian on two high Alpine lakes. Detailed maps of the terrain being flown over are provided in the cockpit and the cabin. Packaged by Ross McLennan.

Beechcraft D18S, with 'Passenger In The Cabin'.

Two complete aircraft in the one package.

Both aircraft have been re-tuned to climb and fly safely at 16300ft in FSX.

The concept of flying with a passenger requires that the aircraft will fly to a preset altitude. The heading must also be changable and the aircraft must fly onto the heading. The autopilot has been modified to allow these outcomes. Speed control of the aircraft is not automatic and therefore the passenger is provided with speed and altitude readouts. In passenger mode, the aircraft is really flying "blind" or by remote control. The passenger may therefore have to correct speed during the flight.

The passenger is seated in row 6 seat 1 on the left, just forward of the door giving a slightly rearward view. The aircraft can be adjusted for the passenger to sit on the right side. However this requires new aircraft and different flight plans and these are not provided. The aircraft have been flown in Alaska and The Rockies.

The down side of the PIC concept is that when flying in the 2D cockpit, side views are those of the passenger (without rotation) so views to the right show the cabin interior. The plus side is that views to the left are no longer blocked by the engine.

The overhead panel of the original aircraft was recommended for taxi-ing. In this version it is fitted out to allow take off, cruising and landing. It provides the pilot with a grand forward view of the scenery ahead.

The aircraft is "dressed" with textures by Patrick Nadig (The Swiss-Eagle) that are appropriate to the scenery but are ficticious just like the flights flown in this Project. I thank Patrick for allowing the upload of his textures. I also thank Jean-Piere Langer for the use of his FS2002/FS2004 icons that have the ability to open and close multiple windows.

FLIGHTS:
All but one of the provided flights are ficticious, most would not be flown in the real world. The "Search for the Mer de Glace" is based on a circuit of Mont Blanc that I did in a British Eagle Bristol Britannia in 1967. Some sim flying skills will be required and you will have to decide how to achieve the outcomes from these flights, safely.

In FSX it is important to use the flights provided. They will set up the aircraft correctly and provide you with the best "controlled" viewing of the chosen Swiss scenery. You will find it difficult to navigate a route to provide the best views for pilot and passenger if only flying from a adhoc point of view.

SCENERY & MAPS:
Positioning etc of the aircraft is based upon the FSX default scenery. To enhance your Swiss Alp experience it is suggested you instal at least the FS2002/2004 Switzerland & French Alps Lod 10 Mesh by Holgar Sandmann. If you have the Switzerland Professional Scenery there is a scenic treat available from this project.

Full screen maps of the area being flown over are available in the cockpit or passenger cabin during the flight. The color slide images are from my ground tour in 1984.

INVITATION:
Welcome then, to my GRAND SWISS ALP TOURS (GSAT) experience flying out of Thun, Sion and Ulrichen in Switzerland using the Beechcraft D18S with Passenger Views to the left from within the cabin. I invite you to climb to the cruising altitude and then sit back with a ..?.. in the hand and enjoy the passing granduer of the Swiss Alps. Do not forget your camera.

INSTALLATION:
The self extracting exe file should be extracted to a temp folder. Two separate aircraft folders will be generated, one for the Wheeled version and one for the Amphibian.

Open the Wheeled aircraft folder and activate the check.htm file by double clicking and print it for reference. Repeat for the ref.htm. There are differences in the two aircraft so the same amphibian files should be printed for reading. These files also allow you to read the original documentation. Unfortunately FSX does not support reading htm linked files in the aircraft cockpit like FS2004 did.

In the wheeled aircraft z_other folder there is a gauge folder (icons) which must be extracted and placed in the FSX gauges folder. There is a flights folder as well, copy and paste to the FSX saved flights folder (My documents/Flight Simulator X Files). The Amphibian has appropriate flights as well, so the same treatment is required. The same wheeled gauge file is used for the amphibian.

Now copy/cut and paste the two aircraft folders to the FSX/simObjects/airplanes folder.

It is recommended you fly with "Tool Tips" turned off so as to have a measure of control over any such problems.

(3) Flying tool developement occurred at a flatscreen screen resolution of 1280 x 960 (4:3) and at other resolutions might result in slight variations in overlay sizing and positioning. Computer screens in widescreen mode will produce "egg" shaped gauges in the 2D cockpit panel and any overlays in the Passenger view.

(4) I have been unable to make the manual cold start procedure work reliably in FSX. You should use the auto start with [Ctrl+E].

(5) Tuning the aircraft to climb and cruise at high altitude may mean they will fly slightly nose down at the same ground speeds when at low altitudes.

(6) The Amphibian is a compremise between working on land and working in water. Once into the take off position in water, which will occur at just below 20 knots, a slight bump up will occur as the float rudder sits deeper in the water. It will take a high throttle setting to get the aircraft moving and it may be slow to stop.

(7) Landing the Amphibian on hard surfaces may lead to a shower of sparks under braking from then on. This will probably be due to under-carriage damage as the aircraft has been set to not have the "shower" under normal circumstances. Very impressive at night.

(8) Beyond an altitude of 8000ft boost falls away and speed will drop off unless you adjust for the changes. This is quite noticable at over 10000 feet. You will cruise at 14500 feet and also climb to 16300 over Mont Blanc. BEWARE IN ALL CLIMBING.

This project is provided as freeware and is not to be used for any commercial purpose. I take no responsibility for any conceived problems as a result of installing this software. You install it at your own risk.

The archive gsat_d18s_picl.zip has 7 files and directories contained within it. 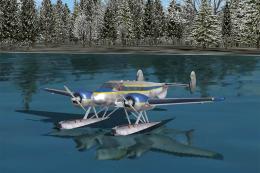 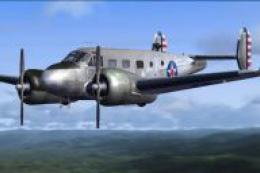 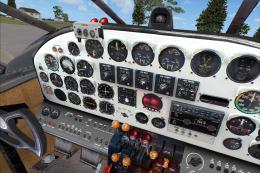 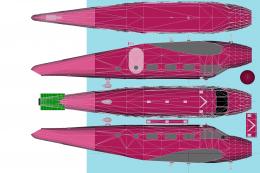 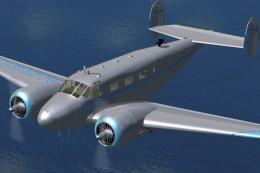 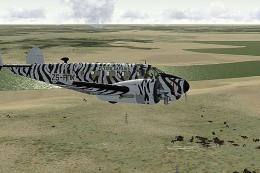 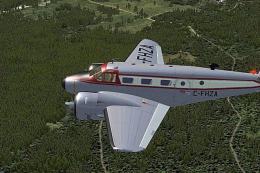 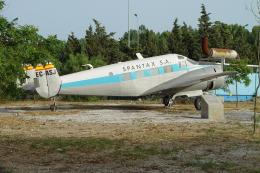 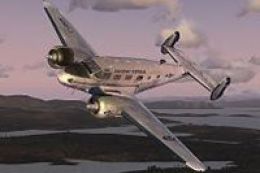