The Super 71 was developed as a "bush" transport by the Canadian arm of Fairchild Aircraft. Four were built, but only one had the "behind the wing" cockpit as modeled here. This is a native FSX Acceleration model. It has the usual animations and DXT5.dds reflective textures. The VC has working gauges, animated flight controls and backlighted gauges. By Paul Clawson.

Screenshot of Fairchild Super 71 in the air.

The Fairchild Super 71 was a parasol mounted high wing monoplane cargo transport aircraft built by Fairchild Aircraft Ltd. (Canada). It was the first plane designed specifically for use as a bush plane in the remote and northern locales of Canada.

The cockpit was positioned back of the wing to allow for a large cargo area under the wing. Only one Super 71 was built with that configuration because the test pilots complained about poor visibility. Three others were built with the cockpit in front of the wing. I have seen only a few pictures of that version and it completely destroyed the sleek lines of the plane in my opininon. Consequently I chose to model the "one of a kind" version with the cockpit behind the wing. It was the first Canandian design with a all metal monocoque fuselage. It first flew in 1934. The fuselage arrangement does remind me of the Northrop "Gamma" series of aircraft.

This is a native FSX Acceleration model. It has the usual animations and reflective DXT5.dds textures. I could not find any documentation of the cockpit, so I based the VC on the afore mentioned Northrop Gamma. The VC has working gauges and animated flight controls. The gauges are back lighted for night ops.

This seaplane does have one small problem that I have observed to some extent with all seaplanes in FSX; when you land it doesn't want to come to a complete stop. Usually, just reducing the prop pitch to zero takes care of this, but not with this model. It still wants to puddle along at about 10 knots. I have to kill the engine to completely stop. I don't know the variables in the FDE that might control this behavior. Once stopped it will stay stopped . 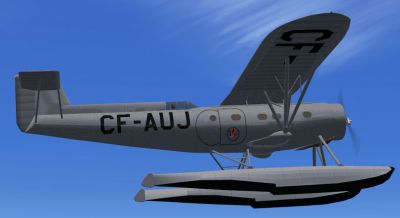 Screenshot of Fairchild Super 71 in the air.

The archive super71.zip has 46 files and directories contained within it.