A repaint of Roger Dial's North American P-51D Mustang modified for FSX. Aircraft is entitled "Pegasus". This is a fictional Reno racer for the unlimited class. This aircraft is very fast (500 knots) and very agile. In a race its only limit is the pilot and the skill to keep it between the pylons. This aircraft has all new flight dynamics and air file modifications and textures by Mark Rooks of RSDG. 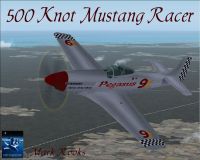 Screenshot of Pegasus Racer in flight.

2.Copy the " Pegasus Racer " folder and paste it in the main aircraft folder.

The archive pegasus9.zip has 8 files and directories contained within it.