Here are two texture sets for the Warbirdsim P-51D-5-NA representing aircraft from the 338th Fighter Squadron, 55th Fighter Group based at RAF Wormingford during August 1944. 44-13954 was a late production D-5 with a factory-fitted fin fillet that was flown by the group commander Lt. Col. John McGinn. He was so taken with the green rear fuselage scheme applied to the 343rd FS Mustangs that he adopted the same scheme for 'Da Quake', although it was not applied to other 338th FS aircraft. On 26th August 1944, Lt Sam Gevorkian, flying 'Da Quake', was returning from combat with Lt. John Kester when they got lost and ran out of fuel on the French coast near Bordeaux. They finally made emergency landings on the beach at Cap Ferret and evaded capture before being liberated by the Allies and repatriated in September. Their aircraft were left on the beach and one was recovered in 1982 and put on display in Paris. Which one is stilled debated but most probably it was Kester's 44-13663. The second texture is 44-13351 'Dottie "Q"', the aircraft of Lt. William J. Ingram, in which he claimed 3.5 kills during August/Semptember 1944. There is a remote possibility it was named after the author's mother, Dorothy Quincey. She knew many Allied airmen during the war and used to tell about the wild mess parties she used to go to... say no more! Sadly she is no longer with us to ask, but this is dedicated to her memory. By Dave Quincey.

Next add the following to the aircraft.cfg file in the 'P-51D-5-NA_Little_Friends_Fillet' folder:-

These repaints were made with the excellent paint kit supplied by John Terrell from Warbirdsim - many thanks John for allowing us to use your work. Reference material was used from Russ Abbey's site (55th.org) and Peter Randall's site, without whose efforts so much would be impossible. The files in this package are freeware and may be adapted for your own use; any textures published based on them must be made available as freeware and acknowledge the authors, Dave Quincey and John Terrell. 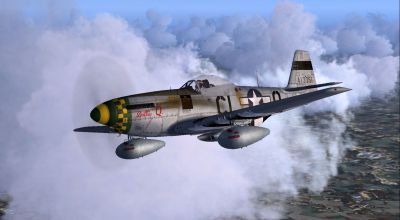 The archive 55thfg.zip has 30 files and directories contained within it.