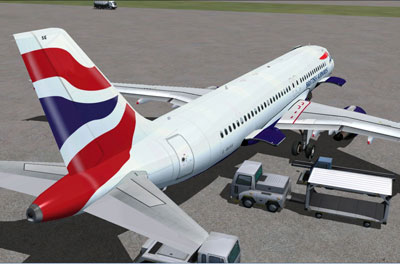 The A320 Jetliner is available in DVD-ROM media format. It was designed by Just Flight and is compatible with Microsoft Flight Simulator. The A320 is considered to be the European counterpart of America’s 737. It has used mostly for short to mid-length flights. First manufactured in 1988, today, there are nearly 5000 A320 Jetliners in service, worldwide.

The A320 Jetliner add-on was designed with the FSX solely in mind. It is a part of the highly regarded and popular Just Flight F-Lite series. Just Flight’s designers worked hard to come up with an add-on that was incredibly detailed, attractive and easy to use and they managed to do exactly that. The designers created both an exterior and interior that looks a lot like the real thing. The plane’s cockpit modeling, custom programmed Multifunction Control Display Unit, IAE V2500 engine models and realistic engine sounds are all top notch. Also included are a pretty impressive number of liveries, more than 20 international ones in all.

As mentioned earlier in this review, there are a number of animations included in the A320 Jetliner add-on. Examples include cargo and passenger doors, thrust reverser, rotating wheels, engine fans, flaps, leading edge slats, elevators, rudder, spoilers, plus much more. This add-on also has a number of special effects such as engine and wheel touchdown smoke and underbelly sparks which occur when the pilot over rotates.

This is a really nice add-on. Individuals interested in trying their hand at the A320 Jetliner will be able to do exactly that.

View screenshots on Just Flight's A320 package for FSX here.