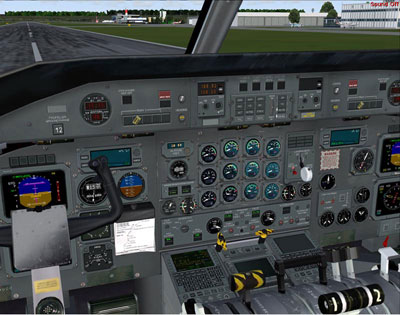 Majectic Software, developers of flight simulator add-ons that surpass the quality of standard payware aircraft have just released their Dash 8 - Q300 aircraft model for Microsoft Flight Simulator X and 2004. This add-on is aimed at professional trainee pilots and ultra realistic panels, features have been added for the most realistic simulation experience possible. This isn't a standard add-on for the general user, it's aimed at pilots in training in real life who want to catch up with their training on the PC.

Majestic Software would like to inform you, that from today on we are introducing a new edition of our award-winning Dash8-Q300 aircraft add-on for FS2004 and FSX - the TRAINING edition. This package is the most advanced of our Dash8-Q300 series and is intended as a training aid for the professional pilots and technicians, as well as for the CBT system familiarization and demonstrations. The training edition is a former AIRLINE edition, which was already in use for some time in the numerous flight schools for the goal pilots and technicians training. This edition provides the full range of failures in every aircraft system using the included instructor station, as well as our new guide on how to utilize the capabilities of this software to prepare to the recurrent pilot proficiency checks. Apart of that, the training edition is full hardware cockpit enabled, and can be used to build home cockpits of various complexities from the ground up.

Another release from Majestic Software is an update to our Pilot and Pro editions, enabling our customers to use the Navigraph nav data provider for the FMC data, as well as benefit from a number of system and FMC fixes and the Windows 7 compatibility. This update comes in a form of 3 all-in-one installers, one per edition, which the current users are adviced to download from our web site.

More news are also available regarding our ongoing Dash8 Q400 project. Following the numerous requests we have compiled the preview paper with the working samples, and the list of things to expect when the new Dash-8Q400 add-on is released.

It is a cool plane. And it's very smart and can flight over all.

I am greatly disappointed in the fs9 version of majestic Dash 8 Q33 Once the Condition levers are in the shut off position, they will not return to max. the auto pilot is virtually non functioning. I have been unable to find any sort of tutorials, hot fixes, patches or even for the fact that it apparently is no longer supported by it's own author. Someone please explain to me how a company can push an unfinished product out the door (and charge money for it) and turn around and disown it???

I purchased the model years ago when I was still flying on MSFS2004 (FS9). Been very happy with it, did some tweaks in the cfg file in order to make it more realistically stable, which I was very happy with. However, WAS very enthusiastic when they mentioned that they are going to bring out a new updated version of the Q300...But sadly,they disappointed me in such a way, as the user mentioned above, pushed their product away and not supporting its clients. Shame on you Majestic!!! This is the exact reason why some people rather distribute your software on piratebay etc.. PMDG did the same thing with their FS2004 B737NG product, and now this with the Q300. So much potential, but all just in for the money part of the hobby.