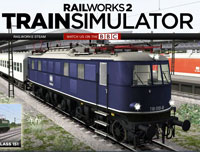 This PC Train Simulator software was original called Railsimulator, then changed into Railworks and nowadays called RailWorks2. The CD-box version comes with impressive documentation with Quick Install, Driver manual, Keyboard & Signal Guide and even a Creator Manual to create your own add-on’s. To install you need first to register for an (free) account with Steam.com. Steam will then take care of a smooth installation of the game, all updates available and free add-on’s.

Image shows the home screen after RailWorks 2 has been loaded.

RailWorks2 Train Simulator is a massive and quite extended community of railway enthusiasts. It offers a wide range of trains, routes, scenario’s, sounds and most of all environmental graphics.

Due to the impressive details, it needs some computing and graphic power. I played it on a Windows 7 (32bit, SP1) desktop, Dual CPU 2.2GHz, 4GB RAM and NVIDIA GeForce 9300 GE, which appeared to be quite minimal but acceptable, although loading/resuming is a bit slow, then. Also when travelling with 125 Mph, the game loses its smoothness a little with this configuration.

But even with setting set to ‘low’, the game is very attractive to see and to play.

Standard you open the game in two steps. Firstly to be connected to the Steam-server, secondly by choosing Start in the first opening screen (the actual game).

RailWorks2 is played by scenario’s. You can choose a scenario by train (dozens different steam, diesel or electric loc’s) or by route (standard 10 included). A scenario can be played in Standard, Career or Free roaming mode.

Each choice gives again several alternatives, so the package is a guarantee for weeks of challenging simulations, certainly in Expert Mode. 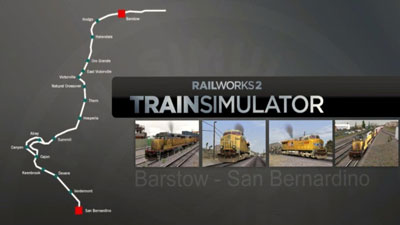 Controlling the game is quite impressive, although sometimes it is guessing whether to choose a menu-item, ‘cross’, a ‘back-arrow’ or the <Esc>-key.

The game is normally controlled by keyboard and mouse to activate the graphic driving controls (simple and advanced), camera positions, screenshot, chart, task, results and so on.

For every scenario there is a route map and a task list, except of course in Free Roaming.

Very handy, certainly in the beginning, is the Pause and Save button.

Some Tasks and Charts are not so understandable at first glance and need some prior study, especially when maneuvering at yards and with junctions is needed.

Although standard sceneries are focused on the UK, there are some possibilities to play in Europe and the USA. The trains are quite detailed, but the routes are more fictional. The railway stations are nice and amused designed with walking people at platforms, boarding and disembarking the train on your command. When not in the Free Roaming mode, you are bound to tight schedules, delays, speed limits and so on. You get penalty-points for each breach.

Beside modern High Speed trains, much attention is paid to steam, diesel and electric loc’s.

The sound of the steam exhaust when accelerating and the horn is very realistic, not to mention the nice looking movements of the driver and fireman.

You can try to drive the steam loc without the automatic fireman, so you only have to keep an eye on the tasks and the signals on the track. Specially with advanced controls, it is a very realistic (and difficult) challenge! Of course, don’t consume more steam then the boiler is generating.

Some scenario’s expect you to load enough coal, water or fuel for the trip, pick up some freight wagons (coupling/disconnecting gives you a hard time) and deliver them at different stations. 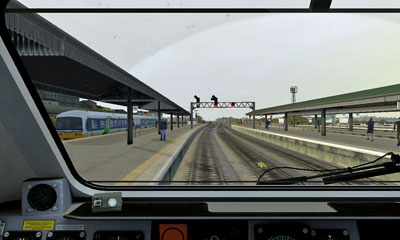 The task includes a lot of shunting from one track to the other, driving forward and backwards, obeying the signals, while you have to operate manually the right junction to get on the right track.

RailWorks2 is an almost professional simulation game, so you are strongly advised to take first some training by choosing the TestTrak route with some scenario’s: Driving a train (start/stop at stations) and the Basic Freight Operations (maneuvering along junctions).

Very realistic is the wheel slip when pulling up or applying the brakes. You have to keep an eye on the coal and water level, as well as the boiler level and pressure, steam generation and usage….and so on.

And in between you have to watch the Track Information window, which gives you all info about upcoming signs, stations and even the slope of the track.

And the child within you lives up when activating the horn or the bell (smile), not to mention opening the doors to let passengers disembark or embark. 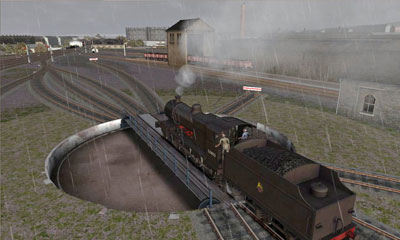 Of course, diesel and electric loc’s are much less laborious, but more challenging because of the much higher speeds to achieve and the corresponding longer braking distance to think of.

The simulation of weather condition is limited and rather static. Even though it gives a nice feeling driving through rain, snow or green pastures.

RailWorks2 is a base game, which can be extended as much as to please anybody’s interest.

Feel free to participate through Steam in the Railsimulator community all over the world with forums in all kind of languages. It offers you international competition, a lot of add-ons of all kinds of trains and routes made by several developers on the same platform.

A nice and free (stand alone) ‘add-on’ to start with, is the Christmas Flying Scotsman of the British National Railway Museum, touring in North Wales (UK) in a snow white winter wonderland.

To keep up with state of the art, it would be most useful to have the possibility to undock the sub-windows (e.g. 2-D map, Task Log) to move them onto a second screen of your computer. That will keep the main window fully visible.

It is also handy to save the progress of more than 1 scenario for future continuation.

You can choose to launch the game in Full Screen or in a rather small Window. It would be most handy to be able to customize the size of that Window.

This PC Train Simulator is what a train simulator should be. Full of variation in international trains, loc’s, routes and scenario’s , not to mention the availability of a steadily growing number of add-ons.

Please your children with free roaming or “torment” yourself with easy/medium/hard scenario’s full of challenges, which some of them can only be met after several attempts.

Because of the realism, the extensive assortment of assets and scenario’s with different levels of difficulty, Railworks2 Train Simulator is absolutely a best-buy with a high ratio of value for money.

We have many more resources that have just been added for RailWorks2, including screenshots, videos and product pages to purchase your copy. With worldwide delivery, get your hands on a copy today. More information using the links below:

This review of RailWorks2 was written by Henk van Ahee from the Netherlands for Fly Away Simulation. He has sailed the world oceans for 5 years as fully qualified 3rd (navigating) officer. After that he had for himself a 45’ steel motor yacht for sailing the Dutch rivers, lakes and waters in his spare time. He is also an avid flight simmer and has much experience with many simulation titles.