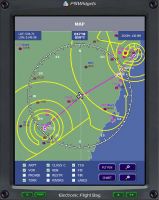 This is a free update for registered users. Pick up the new version at FSWidgets

Several years after its first release, Electronic Flight Bag has been one of the most well-received products for flight simulation fans and X-Plane users for quite some time. Its wide variety of features mixed in with the massive amount of additional detail included in every part of the project means that EFB has become such a useful tool for those who are sick of having to create physical copies and paper charts whilst they fly. If you want a proper simulation of what being a pilot is like in X-Plane, you need to have a modification like this installed.

Recently updated to Version 1.4, this addition of EFB comes with support for extras such as GMap – another big tool that is created by FSWidgets – as well as data that is held on a cloud instead of on the local machine. This makes it easier to get the data you need whilst you are on the move. This also provides full support for X-Plane 64bit now, too.

Created to help reduce the amount of time spent by pilots dealing with things off-screen, this gives you a more or less paperless approach to controlling and managing your cockpit. You’ll be able to open up documents that include things like;

The wide range of features included in here make it a nice and easy tool to get to grips with, whilst providing you with more control and power than you will have had in the past. It connects various features together and offers simple support for PDF, JPG and BMP files. This makes importing information and data extremely easy and will save you time from going between X-Plane and the paper in front of you. Now, everything is stored on-screen and you can easily find all of the functions and advice that you need to fly the aircraft of your choice effectively.

It’s wide range of users and the selection of features such as plug-in installations, NAV logs and even live resources from sources like METARS and TAF mean that you can get easily get all the information you need to make the flight easier from one place. No more looking around, no more manually filling all the information in, and no more downloading official documents when you just want to jump into a simple flight!

This mod has been around for a long time and since then it has gone through various changes and upgrades – the latest edition can be downloaded from HERE. This gives you so much additional information onscreen when flying around, and can be a hugely useful support tool for any pilots regardless of current experience. The developers have made it extremely easy to install, too, so this is about as plug-and-play as possible!