Plane taking off from of Annobon Airport.

Overview - This is a NEW airport for FSX. The real airport apparently does not have an ICAO code - but the code FGAB is used by AI flight plan writers.

These files add the airport to your FSX world and setup the airport for AI traffic - specifically the World of AI packages.

Location - FGAB/ Annobon Island is located about 220 nm west of the coast of Africa, and about 110 miles southwest of Sao Tome Island. The island is only about 4 miles by 2 miles. The island population is about 5,000.

The airport has minimal air traffic - often only one to three flights per week.

The default FSX mesh for this island is flat as a pancake. The shortline is blocky and not very well done. the link below has a photo which shows the island with the airport, the main town of San Antonio de Pale and the volcanic crater lake - Lago A Pot. The island's main extinct volcano rises to an elevation of 598M / 1,961 ft at the peak named Quioveo.

Creating a more exact island shortline and the mesh is a much more complex project for another day.

This is a daylight, VFR only airport. I have set the runway lights to Low.

No parking codes are used for this airport. At this time the maximum airline traffic is one ATR-42 aircraft from Ceiba Intercontinental.

There is apparently some government / military traffic occasionally - a few months ago a flight by an AN-26 crashed just off shore on approach to the airport/ island.

There are no taxi lines drawn on the apron. 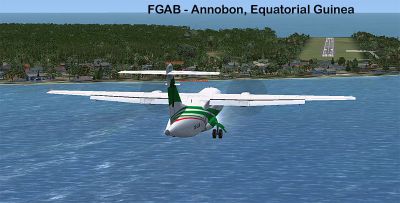 The archive fgab_ade_rjf_v1.zip has 14 files and directories contained within it.