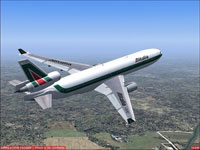 This aircraft is made by iFDG (international Flightsim Design Group),

The archive azmd11pc.zip has 43 files and directories contained within it.