The PBY-5A Catalina don't disappear with the end of the war. It continued flying in many duties. Trans Australian Airlines was a Qantas subsidiary that took charge of the New Guinea flights. After the war the TAA New Guinea operations were styled 'Sunbird Services'. Package includes panel. Model by Mike Stone, repaint by Alejandro Hurtado. 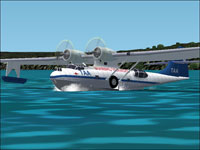 Screenshot of PBY-5A Catalina on the water.

Trans Australian Airlines was a Quantas subsidiary that took charge of the New Guinea flights during the WWII. Two PBY-5A Catalinas were used until July 24th, 1958. The undercarriage and hydraulics were removed to increase payload. So, THIS PLANE MUST BE USED ONLY FOR WATER OPERATIONS. However, you still can cheat and use the wheels if you are not so historical detallist. After the war the TAA New Guinea operations were styled 'Sunbird Services'. Several other airlines, including Ansett, employed Catalinas in the 1950's and 1960's for brief periods on island work.

This file includes the last PBY-5A of Sunbird Services, VH-EBD. There is a FS98 file with VH-WWC, the another one, with a slightly different paint.

When I was making this plane, there was reached 50.000 people who downloaded at least one of my files. Of course, it was not my idea when I uploaded my first repaint. I just wanted to let the people know about a plane that I believe is different, a Ju-52 in Milka chocolate marks. Maybe some day I will do the upgrade for FS2004. Since then I have released 67 files (including this) with 94 different color schemes in total. And I still want to let you know about all the wonderful planes that are, and were, flying around by all the world.
Of course, I must thank to the plane modelers. Specially those who releases its models with the repaint permission included.

The archive pby5ah66.zip has 63 files and directories contained within it.