Two different repaints for the Plane Design Lancastrian: B-022 and LV-ZEI. The Argentinean Air Force had the Avro Lincoln as the main bomber in service, and at least two were transformed to transport versions and called "Avro Type 694 Lincolnian". 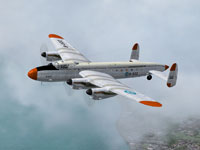 Screenshot of Avro Lancastrian Fuerza Aerea B-022 in flight.

The modifications were carried out by Avro in England (1948) and consisted of placing the nose and tail cone of the Lancastrian and its celestial navigation cupola. B-022 was adapted for long distance flights and attached to the Antarctic Task Force; this plane was also the first tanker of the FAA, modified to refuel the F-86 Sabres in the air. LV-ZEI, despite its civilian registration, was flown by military pilots and took part in several Antarctic campaigns and international flights. It was only in 1967 when the Lincolns and "Lincolnians" were officially retired from service. Textures only for the Plane Design Lancastrian. Included in these repaints you'll get a new interior design for the passenger cabin and the cockpit. Repaint by Damian Radice.

The archive pdln2.zip has 66 files and directories contained within it.