Garuda Indonesia Boeing 737-800, registration PK-GMA. A repaint of the default B737-800. Texture by Muhammad Bukhary.

Garuda Indonesia Boeing 737-800, registration PK-GMA. A repaint of the default B737-800. Texture by Muhammad Bukhary.

[fltsim.xx]
title=Boeing 737-800 Garuda Indonesia New
sim=Boeing737-800
model=
panel=
sound=
texture=GIAN
kb_checklists=Boeing737-800_check
kb_reference=Boeing737-800_ref
atc_id=PK-GMA
atc_airline=Garuda Indonesia
atc_flight_number=GA738
ui_manufacturer="Boeing"
ui_type="737-800"
ui_variation="Garuda Indonesia New"
ui_typerole="Commercial Airliner"
ui_createdby="Microsoft Corporation"
description="One should hardly be surprised that the world's most prolific manufacturer of commercial aircraft is also the producer of the world's most popular jetliner. The 737 became the best-selling commercial jetliner worldwide when orders for it hit 1,831 in June 1987 (surpassing Boeing's own 727 as the previous champ). However, it wasn't always that way\s in the first few years of production, there were so few orders that Boeing considered canceling the program. They didn't, and the airplane has more than proven itself in over three decades of service an texture By Buky. 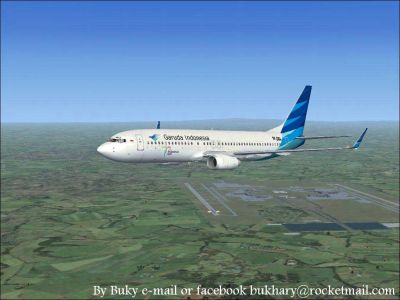 The archive 738_garuda_indonesia_new.zip has 34 files and directories contained within it.

The Boeing 737-800 PK-GMA is one of the most enjoyable aircraft around, giving you all the best of many worlds within the Boeing family. I have always been a big fan of this family of aircraft and decided to download this specific Garuda Indonesia design for FSX. This particular livery looks wonderful and does the aircraft a great service, giving you a re-paint of the original aircraft.

Whilst the designer Muhammad Bukhary has not done any major changes or adjustments to the actual performance side of the 737-800 PK-GMA, I found that this was a really interesting take on the Garuda Indonesia design, offering something fresh and interesting.

I always like to have multiple liveries and whilst I tend to use third party 737-800 PK-GMA mods, I decided to try this out and see exactly what I had thought.

The 737-800 PK-GMA is apparently the world’s most popular jetliner, so it was no surprise to me to see that Garuda Indonesia – a massive, global firm – was using it as a location for their name to be spread. I also found that the mod here does a great job of portraying this, with a crisp and detailed texture used for the aircraft to accurately portray this.

Not only does this really give you a total appreciation of both the aircraft and the company but it will help you see just how much detail is on the livery.

From a distance it looks a little dull and uninspiring, but edge ever closer and you’ll see a major improvement in the overall attraction of the design. The livery is very easy on the eye and makes a great addition for anyone who would like to enjoy the unique style of the 737-800 PK-GMA in a new, interesting design they may have missed out on in the past.