Regarding Flight Simulator X
Certain functions and visuals will not work on this aircraft if it is installed in FSX. Therefore, we (Project Open Sky) will not provide support for FSX related issues with this A/C.

This aircraft is made by Project Open Sky

These effects works correct only at FS2004 so when using at FSX , which is not supported.
Open Panel/Posky748/Pky_AdvInit.xml
Change under to 0

If you would like better frame rates, then copy & paste the DXT3 textures from the "DXT3 Textures" folder into the "Texture.FedEx" folder located inside the "Boeing OS748FV4_GENX" folder. I have only included the main exterior DXT3 textures. 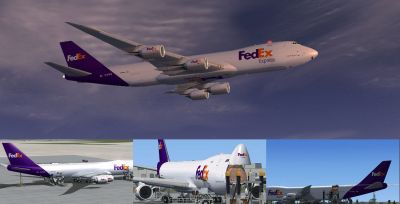 The archive fedexposky747-8f.zip has 135 files and directories contained within it.

As somebody who is as interested in the graphical side of simulation as the performance side of things, jumping into the cockpit of this FedEx labelled aircraft was something that I was really quite excited by doing, so that I could see the depth of the detail on the new re-paint job that was carried out by the very talented and friendly Paul Craig. The Boeing 747 is an aircraft that I – and most of us - have a lot of time for and a fair amount of experience in so jumping into the cockpit was something that I was relishing.

The aircraft is very easy to get working, which obviously makes your life a whole lot easier. It has a lot of the little bells and whistles added in there too such as wingtip lights as well as strobes, along with a beacon light and a wingroot light case so you can ensure that you are giving plenty of notice that you are on the way.

If you are looking to get this kind of depth of detail in place you simply need to look at this package; it’s in-depth, it’s easy to work and it’s very simple in terms of its range of features that are included so you won’t need to worry about actually having experience in the real thing to get used to this, like some mods can be like!

The package also comes loaded with plenty of brilliant animations and changes such as dynamic wings which will flex accordingly depending on the speed that you are going, the pitch and the weight of the aircraft. For those who like to have these little extra features, it can be nice to have them in there just to boost the overall appearance and presentation of the aircraft.

One thing that I do need to note, though, is that some features for this don’t work quite as well as they should due to the fact it was originally made for FS2004. Therefore, it can require a bit of messing around to get the aircraft to operate fully as it should in FSX, but there are lots of support forums on the official forums. I never had any problems personally but many others did so you might be someone who has some texture and loading issues.

The aircraft has many other smaller animations like lighting, rolling wheels, opening doors, independent tire rotation and specific steering and rudder locking. These little animations and performance features make it very easy to get to grips with this aircraft in relatively little time at all. It even comes with some rather awesome crash effects which I found out to my detriment on more than one occasion! Overall, I was really impressed with this package and would suggest that you check it out if you like this kind of system.

As far as detail and depth goes, this is really up there with the most impressive recreations of a Fedex branded aircraft I’ve seen – the detail is spot on, as is the operation and the performance of the aircraft itself. Well worth a download!

does it have a cockpit is it like the one in the game.

Hello, In a virtual airline on fsx we modified the 747 by adding a virtual cockipt would it be possible to broadcast on our server with your permission? thank you

I dont know if this is just me but I don't have a virtual cockpit. Is there anyway of getting one?