Greece Air Force F-4F Phantom II demo version with banners. The McDonnell Douglas F-4 E/F Phantom 2 is a two-seat, twin-engined, all-weather, long-range supersonic fighter-bomber originally developed for the U.S. Navy by McDonnell Aircraft. Proving highly adaptable, it became a major part of the air wings of the U.S. Navy, Marine Corps, and U.S. Air Force. It was used extensively by all three of these services during the Vietnam War, serving as the principal air superiority fighter for both the Navy and Air Force, as well as being important in the ground-attack and reconnaissance roles by the close of U.S. involvement in the war. First entering service in 1960, the Phantom continued to form a major part of U.S. military air power throughout the 1970s and 1980s, being gradually replaced by more modern aircraft such as the F-15 Eagle and F-16 Fighting Falcon in the U.S. Air Force and the F-14 Tomcat and F/A-18 Hornet in the U.S. Navy. It remained in service in the reconnaissance and Wild Weasel roles in the 1991 Gulf War, finally leaving service in 1996. The Phantom was also operated by the armed forces of 11 other nations. Israeli Phantoms saw extensive combat in several Arab–Israeli conflicts, while Iran used its large fleet of Phantoms in the Iran–Iraq War. Phantoms remain in front line service with seven countries, and in use as an unmanned target in the U.S. Air Force. Phantom production ran from 1958 to 1981, with a total of 5195 built. This extensive run makes it the second most-produced Western jet fighter, behind the famous F-86 Sabre at just under 10,000 examples. Panel, gauges, model, sound and textures by A.Meyer.

The German Airforce initially ordered the reconnaissance F-4E in 1969, receiving a total of 88 aircraft which were delivered from January 1971. In 1982, the initially unarmed F-4E were given a secondary ground attack capability, and were retired in 1994. In 1973, under the "Peace Rhine" program the German Airforce purchased the lightened and simplified F-4F which was upgraded in the mid-1980s. Germany also initiated the "ICE" (Improved Combat Efficiency) program in 1983. The 110 ICE-upgraded F-4F entered service in 1992, and are expected to remain in service until 2012. Twenty-four German-owned F-4F were operated by the 49th Tactical Fighter Wing of the USAF at Holloman AFB to train Luftwaffe crews until 2002. In 1975, Germany also received 10 F-4 for training in the U.S. In the late 1990s, these were withdrawn from service, being replaced by F-4F.

Technical data of the F-4F Phantom:

The AFS-design F-4F Phantom product gauges in panel and virtuall cockpit the following: 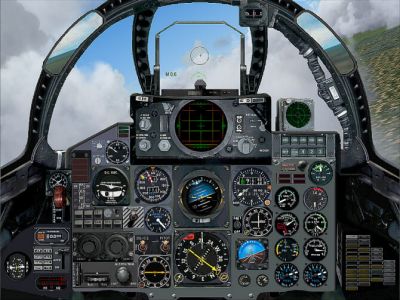 The archive f-4fdemo09_fsx.zip has 11 files and directories contained within it.